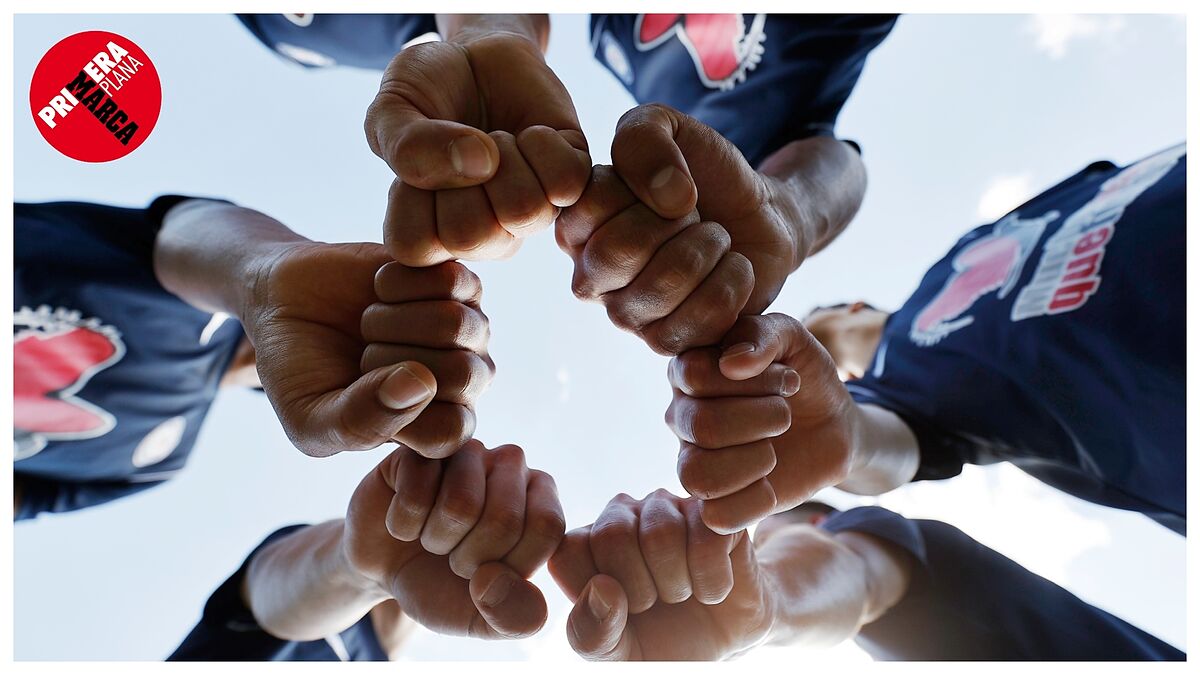 Yor used to play He was on the high school team. But I preferred the street to the team. When I get out, I want to play again. I want to take football seriously. You can be in the street and with football, why not?” The 18-year-old boy is one of the young people who is serving judicial measures at the Teresa De Calcutta center, in Brea de Tajo, a town in the south of the Community of Madrid. If it weren’t for a perimeter built for deterrent purposes, the center could easily pass for a residence hall.

On the pitch, with artificial turf, a six against six is ​​played at full intensity and only the gasps of the footballers and the voice of Antonio Fernández Marchán are heard. “Come on, come on, okay, guys.” The sun beats down on one of these six hundred Mondays that Antonio has behind him as the creator of the program Mucho más que Fútbol. He is currently part of the technical structure of Sevilla, he is one of the members of the international recruitment team and he only put one condition on Monchi: “I told him whatever he wanted, but that I needed these two hours every Monday to be with the kids. They are sacred to me.”

The ball equals us all, with football the boys feel free

Antonio Fernández Marchán (creator of ‘Much more than football’)

Fernández Marchán believes in the rehabilitative power of football. As a member of Vicente del Bosque’s coaching team at the Confederations Cup in South Africa in 2009, he shaped his program. He came up with it by visiting the most sordid places in the cities where the national team played. He presented his project in Penitentiary Institutions and was welcomed from the first day. With common prisoners and with minors: “It is one more workshop in the common centers and also in the centers for minors. It’s easier with the kids. It is a school of values. The ball equals us all. With football, these people feel free. Let’s not forget that they are not here because they want to. Some are for very serious crimes. But no one is born a criminal, you have to give them a chance.”

One of the kids bites his nails watching the game. He had a sprain a week ago and can’t play: “I don’t know how to explain it. Football makes me happy. It’s the best two hours of the week. If it were up to me, I’d play every day.”

To form the teams, the coach has taken the precaution of lining up together two members whose gangs, on the street, are rivals. Still, he has to keep an eye out because he has detected challenging looks between them. Sparks are very rare. A part of the program determines that in the matches the players referee themselves. And, as one of the kids tells us, it works: “Encourage camaraderie. If there is any injustice, we resolve it among ourselves. If you messed up, you accept that it was you. But what I notice is that it’s not only good for football, it’s also good for any of the other activities we do here.”

Antonio Fernández Marchán, used to capturing talent and knowing if a player is good just by how he walks, acknowledges that he has seen some interesting footballer: “Because of the age these guys are and because of the environment they come from, none of them are going to be professional footballers. But they have come to be kids from some of the most important quarries in Madrid. Boys who played well and who drugs or the wrong companies have taken them down another path. Here we are playing a match that classifies us for a happy future.”

And it is not impossible. The director of the Agency for the Reeducation and Reintegration of Minor Offenders of the Community of Madrid, Diego López del Hierro, guides the visit of Primera Plana through the center: “We professionals give them the tools and the minor who sees the opportunity can take advantage of it . We are between 85 and 90% successful in reintegration. Right here, in the center, we have a person who is graduating from the UNED. She is studying law.”

The possibility of reintegration is something that Fernández Marchán corroborates: “Look, my hair stands on end when I remember it. There is no greater satisfaction for me than, when the years go by, some of the kids who have been on the program get in touch with me and tell me: “Thank you, Antonio, you saved my life.” And I have several cases. There is a very striking one, from someone who is now succeeding in music. She passed by here. Four years for attempted murder. Recently, he searched for me on social media and didn’t stop until she found me. Or people write to you who, of course, today are women and men, full-fledged, with a business and a family. Some have had to go abroad to break the vicious circle. But the important thing is that they have been rehabilitated.”

The profile offered by López del Hierro on minors in compliance with judicial measures is very well defined: “There are arguments that go hand in hand: broken families, school failure and a devastating cocktail, the use of soft drugs and alcohol, which starts earlier each time“.

López del Hierro emphasizes a very striking factor: “The economic status does not determine who enters these centers. Here, in the Teresa de Calcutta, the largest in the Community of Madrid, you can find minors from any district, from deprived neighborhoods to districts where there is supposed to be a higher economic level. That is not what marks the conflict in these cases.”

I don’t know how to explain it: football makes me happy, I escape from here

Monday’s training, these particular Mondays in the sun, is coming to an end. Antonio does not lose sight of the kids. He frowns, with a certain disgust, at one of them: “Do you see that one? The one that opens to the right wing? He is 21 years old. He can no longer continue here. He is going to enter a normal prison. We are worried. Let’s see how it fits.” And he is not wrong. He is going to go from an environment in which elements that indicate that we are under a regime of deprivation of liberty are barely distinguishable. We visit classrooms where wood, painting, electronics are worked, where they work on demand making small handicrafts. We go from the soccer field to the basketball and handball courts, to the gym… The doors open and close without having anything to do with the sordid environments of other centers. The garden, also worked by minors, is like an orchard. The rooms are individual and, as our hosts point out, everything is focused on creating a favorable environment: “We are where we are. Nobody comes here because they want to. But five meals a day, good healthy habits in every way… It is an opportunity” .

When his schedule is clear, Fernández Marchán offers his team his only allowed vice: “We have a barbecue with cokes. There is nothing they like more than that“.

‘My eleven gold’, the other team

The program ‘Much more than football’ has been running for 13 years and Antonio Fernández Marchán is going to capture his experiences in a book that will be published in the coming weeks. Under the title ‘My eleven of gold’, the current talent acquisition coach of Sevilla wants to publicize the many profiles that have gone through his training. Respecting the privacy of minors, he will tell about especially sensitive cases and, in addition, will link them with the different demarcations that a soccer team has. Each of the profiles, which he will protect with fictional elements, will be sponsored by celebrities and athletes. The sale of the book is for charity. “In what I tell, always respecting minors, there is everything. From people who did not know how to run, they laughed at them and went out playing soccer to cases with especially serious crimes. I wanted to write it, in my own handwriting , because it is a very personal, very direct experience,” says Fernández Marchán. And it can’t be any other way for someone who travels 300 kilometers every Monday so that a group of young people can feel free around a ball. “Football makes us all equal.”