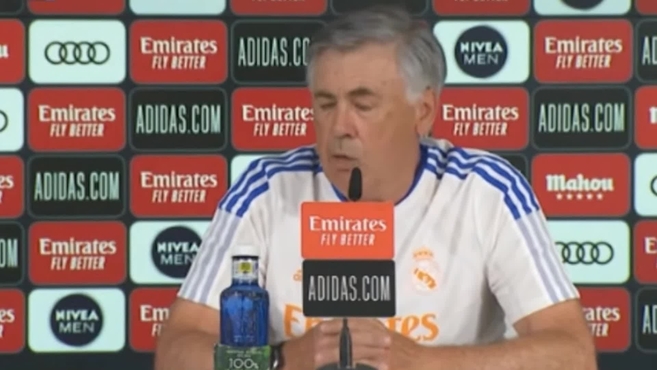 Carlo Ancelotti has offered its second press conference of the season with the good feelings of 1-4 in Vitoria and the permanent shadow of Mbappé case. The Real Madrid coach has not entered the market questions, focused on Mbappe. He has insisted once again on how satisfied he is with his staff and has left important notes on the medical situation of Kroos and Modric and regarding the idea you have in mind with Marco Asenio. The Italian wants the Balearic Islands to be an answer to the area of ​​three midfielders, more now without Odegaard and with two of the three usual injured.

Hazard: “Hazard is not at the optimal level, but close. I don’t see a player afraid of going to the crash. I see a player wanting to show his quality”

Play for Madrid: “You have to combine quality and a very strong character, that has changed in recent years. It is very important to know how to manage that. If you arrive at Madrid it is because you have technical or physical qualities. Later, the great player manifests himself because he has character, personality. Not being afraid. The ability to have character to show quality is very important. This does not always happen. Some players can have problems with this. The mental aspect is much more important at this time than when I played. changed. If you don’t train and work, you can’t show the quality you have. “

Isco: “He has not had a good time in recent years. I see him well, he can play … or not. But I see him with desire. He has understood it and now he is working well.”

Asensio: “It’s fine and it’s going to be important for us. I’m putting him in a different position, let’s see how he’s doing. I’m testing him on a line of three in midfield. I think he can do well. He arrived in good shape from the losers. Games. I am testing Asensio as a midfielder, from the left or from the right. I think he can do well in the line of three. The absence of Modric is important, but we have a squad capable of competing if we do not have Modric or Kroos. The presence of Casemiro, which is very important. Valverde also did well against Alavés. “

Your tweet and Cristiano: “Subject finished. I wanted to say that the idea about the future is the same as I have. We look forward. Everyone in Madrid is fond of Cristiano. Me more, because he helped us win titles. I wish him the best.”

Odegaard: “He has made this decision. Here he has worked with great intensity. I think he will have a good time in a great team. Talk to him about the competition. Then he and his family have made that decision, he is going to a great club” .

Modric and Kroos: “They are two different cases. Modric may arrive against Betis. Kroos I think he will be ready after the break. Tomorrow Carvajal returns, which is very important for us.”

Mbappé: “I don’t care what will happen in the next few days because my squad is very strong.”

Market and club: “Our idea is the same. This squad can compete for everything. We have many top players, I cannot say them all. It is full of stars. The commitment is total. Titles are won when the star works for the team.”

The dressing room and Mbappé: “The atmosphere inside is very good. I think the players are motivated, focused on work and games. They are not on the market, they only talk about the games to prepare well. The group only thinks about preparing the games well and creating a good atmosphere. Now we have it, I hope we have it for a long time. “

The game against Levante: “We have to repeat what we did against Alavés. The improvement is in what was done in the first half, in being more intense and faster with the ball. I see the team well.”

Koke: “We are hungry to be champions”

Joaquín Fernández: “We were always with the last bullet, but it is already very difficult”