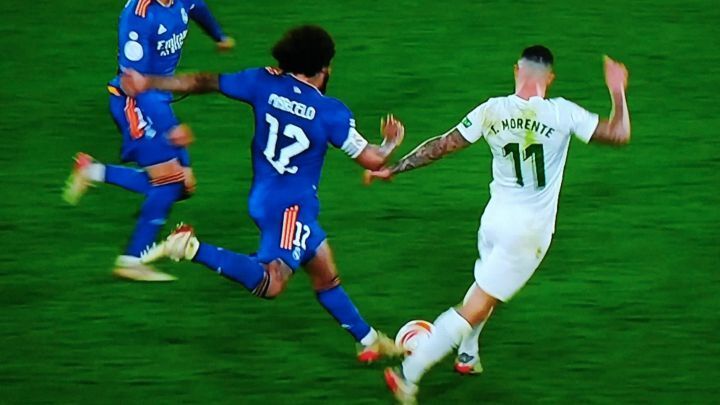 TOappeal has dismissed Real Madrid’s appeal after Competition punished Marcelo with three sanction matches for his expulsion at the Martínez Valero in the round of 16 of the Copa del Rey.

The Real Madrid winger was punished with a game for the direct red card shown by Figueroa Vazquez which reflected the following in the minutes: “Knocking down an opponent and thereby preventing an obvious goal scoring opportunity”. Appeal considers that “since the images are compatible with what is reflected in the record, not being able to appreciate a manifest material error, this Committee must necessarily reject the appeal imposing the sanction in its minimum degree.

Marcelo was also punished with two games for telling the referee “You’re so bad“. Appeal understands “adjusted the application of article 117 of the Code of Discipline, since it sanctions attitudes of contempt or disregard provided that the action does not constitute a more serious offense, which occurs in the present case, imposing the sanction in its minimum degree.

An appeal against this resolution may be lodged with the Administrative Court of Sport within a maximum period of fifteen business days from the day after the notification is received. The Brazilian misses the Copa del Rey quarter-final match Thursday February 3 in San Mamés and the hypothetical semifinals if Real Madrid qualifies.