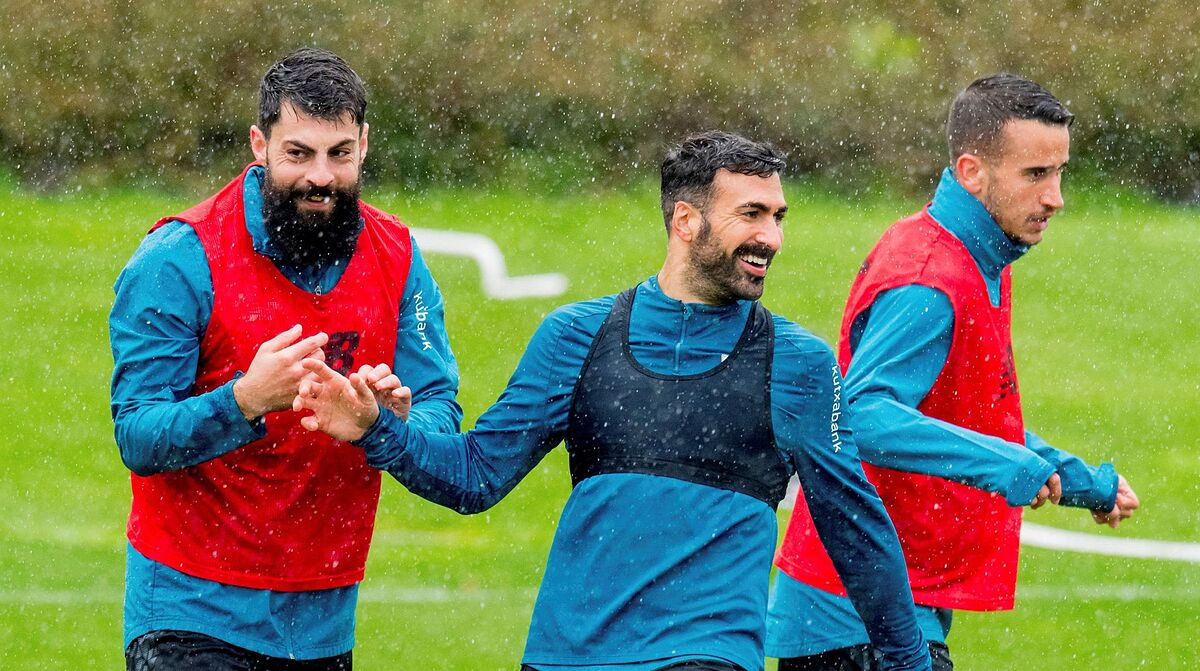 The side of de Zumarraga could not imagine facing two Cup titles in just 15 days and more, having won the Super Cup last January

Mikel Balenziaga was one of the figures in the Super Cup won against Real Madrid and Barcelona. The full-back took advantage of his moment because of Yuri’s problems and was uncovered to the point that days later he renewed his contract for one season.

Has a derby in a final had special relevance in the way you prepare it?
No. We have had two weeks to prepare for the game, do our best and get it done. What we have to do is enjoy every moment because finals are not played every year.
You said that one of the keys to the Super Cup was believing that they could beat Real Madrid and Barcelona.
Being at our highest level we can beat any team. We always go out to win and we don’t speculate. That is the tool we have to be optimistic. We must believe in ourselves and know that by doing things well we can win the finals.
He was in the Real when he was a youth. I imagine it will be special to play a title against the club in which he was part of his training as a professional …
It’s going to be nice. There I have friends with whom I met during my time at La Real. In that aspect it will be special.

We cannot be considered dead, that when we are worse we get ahead

What would you say to those fans who are worried about having to put up with Real in case of losing the final?
You have to enjoy the moment and we are in two finals. We simply have to focus on these 90 minutes and do our best to win the Cup for Bilbao.
Athletic has been solvent in the qualifying rounds but in the League they have lacked a point of success to carry out their matches. Why is this happening?
That’s a good question. It is true that this year from the beginning we have seen a very real option to reach another final and we have achieved it. Unconsciously, we may have stopped getting points in the League that would have been very positive for us in our classification.
They have been epic in the last two editions of the Cup with several heats with the water up to their necks.
In that regard we have proven to be competitive, that we cannot be considered dead and in those moments in which we have been more outside than inside, the team has known how to believe that the game could be taken forward. And so it has been.

We know what our weapons are to face the matches

Although you concede very little to your opponents, every mistake in defense penalizes you. How is this managed mentally?
In almost every game we have been superior to our rivals and we have left points that we should have achieved. It is very positive to concede little, that they do not give us many chances, and that we make more chances to win the game. We know what our weapons are to face the games.
Since the arrival of Marcelino you are showing a more offensive version. For what is this?
Soccer is moments. In January we had a change of coach. I had to be present on the field and the way of playing that the coach has makes the wingers more protagonists in attack, but what I always say and the coach always says, the first thing a winger has to do is close his band and then try to contribute the maximum in attack.

All Athletic fans, and not just the players, have dreamed of scoring the winning goal

It’s not about goals, but if he wants to win …
We have all had that dream and not just the players. All Athletic fans have had that dream at least once in their lives. It would be something very nice, but I’ve only had one with Athletic in my entire career – he did a second after hitting the ball in a defender. What I want is to do my best to have guarantees to be able to win it.
Have you ever imagined the possibility of winning three titles in the same season?
I would never have imagined it. When I arrived at Athletic, that first final of 2009 in Valencia was milk. We couldn’t win it. Then there have been other finals, Super Cup titles, and right now the dream is to win the Cup.