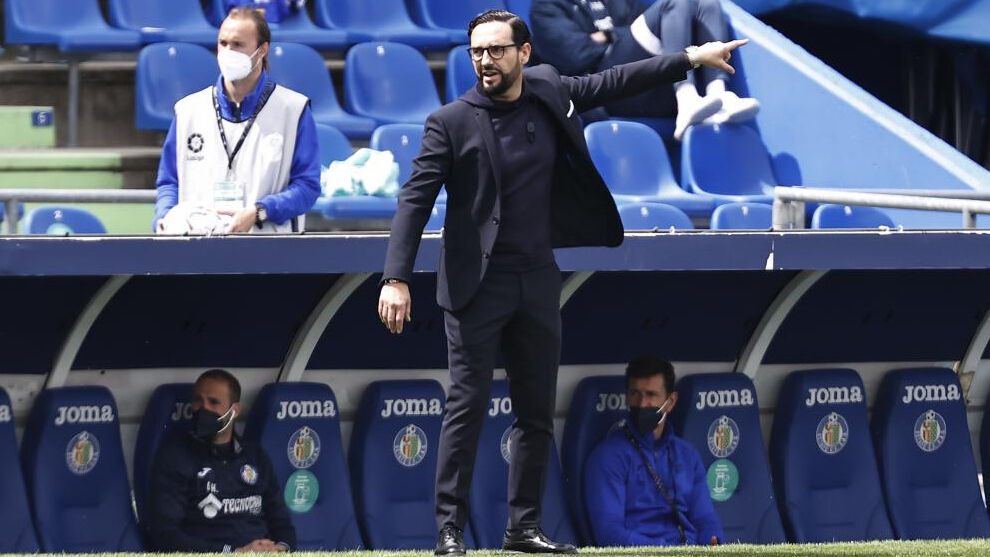 The coach affirms that his purpose is to fulfill his contract, which ends in 2022. His team is four points away from relegation and will face Madrid and Barça next week

José Bordalás (Alicante, 1964) suffers for the first time since he arrived at Getafe the pressure of looking askance at the relegation places. Used to fighting the last three years to play in Europe, lives an unprecedented situation in a club that faces two consecutive top-level matches against Real Madrid and Barcelona.

The Valencian has addressed in detail the news of the azulón box, analyzing Real Madrid, his next rival in the domestic championship. In the first place, he praised the figure of Zinedine Zidane, of whom he said is the best coach that the white club has had.

On the other hand, he assured that Take kubo he has to mature physically to be a great player; and for the first time he made his intentions clear at Getafe: his goal is to fulfill a contract that ends in June 2022.

“Coaches always live in a state not of concern, but of responsibility. Whatever the result, you live in the moment. In my case, I’m ready. I knew that a less good moment than the ones we have experienced was going to come. It reaches the big clubs and obviously it was going to come to Getafe after four years of resounding success: the year of promotion and the three in the ‘top 8’ of LaLiga fighting for Europe. We must face it as professionals that we are with the responsibility that it entails.

“It is true that the squad was larger before and this year it has been reduced. Players who were also important came out. And not being in Europe, the club considered appropriate, that being small, we could not make an expense as was done previously . The team has accused him. It is true that important players have remained, but the output of nine is a considerable number if we add that of Cabrera in the winter market. In the end there were names that contributed. But this is not the time to talk about those who are not and yes about those who are.

“Year after year Jorge Molina showed that he was very important and helped us a lot. Not only in his scoring role. He gave oxygen, provided experience and alternatives. But not just yours. Antunes on the left side, who was a replacement with Olivera; Jason, he was on loan but he was from the band; Kenedy, Hugo Duro, Cabrera himself, Etebo … Maybe we had more alternatives and we have noticed. But now is not the time to lament, but to fully trust the players we have, who will be able to score the points we need. “

EXPERIENCE IN FRONT OF GETAFE

“All the seasons that pass are experiences that one is acquiring in wisdom. Spending time in a humble and small club, the difficulty is greater. The normal thing, in quotes, is that Getafe fight to score points to save the category. We have been able to be three consecutive years in the ‘top 8’ of LaLiga, to fight for Europe and even a season for the ‘Champions’. This has generated great expectations and demands. Players left and others did not arrive that, in principle, we wished and that they had given us that leap. It could not have been due to the club’s possibilities and we have to accept the situation and face LaLiga with different objectives from the previous ones “.

“The coach lives with a very high pressure. It is difficult to maintain that pressure and that demand that the coaches themselves have to improve. That generates demand. All teams want to improve their seasons year after year. That entails enormous responsibility and stress. Living together With this stress it is not easy, we have to learn to live with it. I understand that Zidane at a given moment took a break as did others like Guardiola or Luis Enrique. They have been many years in a continuous way and football and the bench generate a lot of stress “.

“Without a doubt it is the burden we are having. The previous seasons we always had a very good scoring side with a significant number of goals and we had been among the best in terms of goals conceded. Not only from LaLiga, from the big leagues. We came to be in the fourth place comparing ourselves with the Juve, Atlético, Barcelona, ​​Bayern… That is something to note. It is true that this year we have a very large deficit and we are accusing it. It is reflected in the points. To win you have to score. We have this deficit, not because we do not generate, because of lack of success. We create situations to have a greater number of goals “.

“Real Madrid is used to playing various competitions. A Real Madrid player knows his responsibility when he arrives and has some habits and a high level of demand. In addition, at the moment they are playing LaLiga and it makes it difficult. The favorite is Real Madrid “.

ABSENCES IN THE WHITE TEAM

“All casualties are important for the coaches. Real Madrid fights for the tournament playing matches with footballers from the subsidiary because they did not have enough troops to make an 11. That has a enormous merit on the part of Zidane. They have a different element and it is always complicated. I can’t say what low is important. “

“Real Madrid has us used to incredible feats. If there is a team capable of recovering and surprising year after year, it is Real Madrid. It is the only one capable of winning three Champions Leagues in a row in the history of the competition and we do not know if that can be repeated. Even teams of a very high level that seemed unbeatable have not been able, like Bayern this season. He won the ‘Champions’ and they thought he was going to establish himself and win several in a row. That shows how difficult it is and only Real Madrid has been able to do it. “

“I have always had a personal weakness for him. He is of an incredible level and for me he is a star, without a doubt. But I cannot speak only of Benzema, they have players of a great level like Modric, Kroos, not forgetting Ramos, who if he is not the best center-back in the world, he is one of the best. He has shown it for many years. “

“He is a player who gives you many things. He is not brilliant, he may not be spectacular on a technical level, but he is. is a team player, a great teammate very loved by all and who in the end is always a six. It will never let you down, gives it all. Throughout the history of football there have always been players who know what they are going to give you, who do notThey stake out technically and brilliantly they give balance to all aspects. Very necessary”.

“Each one tries to do the best possible within their capacities. Getafe is honest, honest and always faces the games to win them. I am left with adjectives that were said three seasons ago. with a derogatory intention: that we were a team very aggressive and very intense. However, now that intensity and that aggressiveness is a compliment to many teams. It is often criticized when it is not put into practice. Be part of the high competition. We are not worried or bothered in the least that these adjectives are put, because I understand them as a compliment. “

“Coaches don’t know what the immediate future holds. You have to live from day to day. Now all my energies are focused on the next game and trying to score the points to achieve permanence. I do not think beyond this season, the weeks that remain, what we have at stake, how important the final stage is. We are tired of seeing coaches who have a contract and who, for different reasons, cannot continue or yes they do. My goal is to continue and fulfill my contract with Getafe. But this is football and we all know that coaches live from results. In football there is always a selective memory and in the end the past is past, I always tell the players. You have to focus on what is imminent and what we are experiencing now. “

Asturian feast in Lezama: lamb on the stake, stuffed onions and suckling pig with cider

Graffiti at the Camp Nou against the Super League