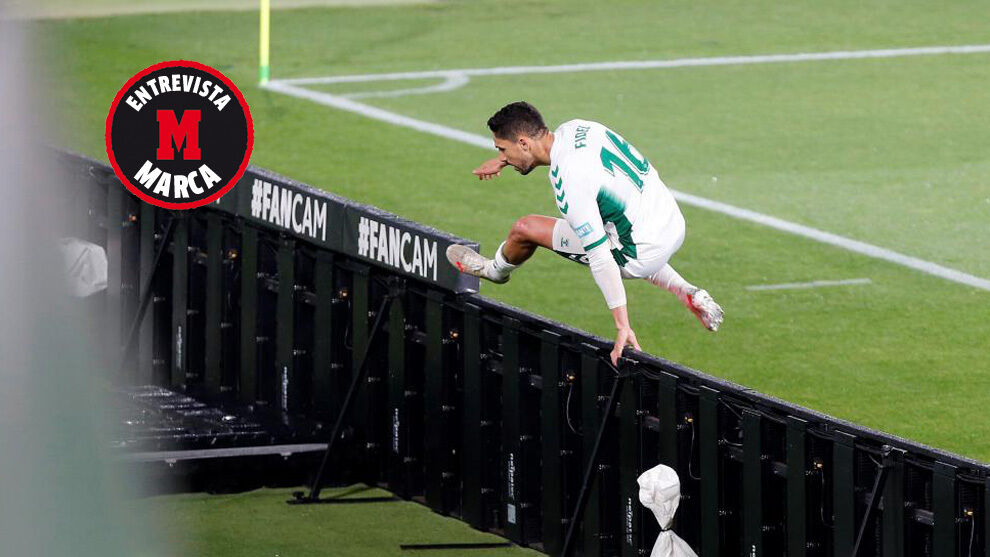 The attacker is one of the pillars of the Elche team and is optimistic in the face of the duel against the colchoneros, where salvation is at stake

Fidel Chaves (La Dehesa de Riotinto, Huelva, 1989) demonstrates in the Elche that the second parts can be good. The winger has reached his maximum level with 31 years. He has contributed five goals and three assists in the fight for salvation. The Elche team receives the Athletic in full fight for the title.

Confident to surprise?
Of course. We come from a victory after a long time without winning. It was not a particularly brilliant match at times, but it was very complete. In the previous one, we missed two points against a direct rival, but we managed to overcome. Atlético is one of the toughest rivals out there. He is more needy because of the last puncture, but we are going with enthusiasm and confidence. We are trained to get a positive result.
Better to receive them in a moment of doubt?
You never know. Maybe yes, coming injured and being able to play with that anxiety. We are just as needy as they are, with a different goal. They fight for LaLiga and we fight to save ourselves.
What is your downturn due to?
In such a long season there are difficult moments and he has lost important players. We are in a different season due to Covid-19. Madrid and Barça are up every year and they know how to overcome difficult moments. Like Atleti, which has had a very good year and years ago won LaLiga. In the previous ones, it was close. Perhaps he is going through a difficult time when his direct rivals are better. The other super teams with any downturn have reduced the lead. But I am convinced that Atleti will fight the League until the end.
You have already stood up to powerful teams.
We beat Sevilla and drew against Madrid at home. We played a good game at the Metropolitano although we came out with nothing. Our image was good in demanding matches, but we would have liked to score more points. The trajectory at home is being good.
The keys to winning?
In the games we have won, we have been a very organized and solid team at the back, taking advantage of the opportunities. Atleti is pure order, with a very successful and defined system. Simeone has done some variation when things were not going well. They have very decisive players. We know of the difficulty.
Does it give you vertigo to see yourself in descent at this point?
No way. The important thing is to be out on the last day. This is week by week, we do not have much margin for error and each result is decisive.
What is essential to not go down?
Know how to take the blows. In recent weeks we had several against Osasuna, Huesca and Valladolid but we have managed to overcome. I hope we do not have any more difficult moments, although it would be logical to have them. Overcoming them will be key.
How is the change in goal explained?
I don’t think that Escribá has to explain much. Edgar Badia has shown a very high level in 30 games but the coach has decided that he has to play another goalkeeper. We have no choice but to accept the decisions. Sometimes I have played and sometimes not, like other teammates. At the press level, there will be more debate, because Edgar has done things well during the season, but we have two great goalkeepers.
He made his debut as captain in the last game.
I am very proud to wear the bracelet of a team with so much history and that I feel so much. In Elche I feel at home. I owe a lot to this club and this city.
Show that second parts can be good.
I am going through the most mature moment of my career. He catches me at 31 years old. In the previous one I was 22-23 years old and things look different. I have had difficult seasons and you value the moments more. I have enjoyed the trust of Almirón and Escribá. I am happy to be an important piece.
What else influences you to live your best moment?
I continue to maintain more or less the same characteristics. I have learned a lot at the level of game control and decision making. I have improved defensively. I had to play lane and I felt comfortable. I also played on the inside and adapted. The more versatile you are, the more you can give to the team and benefit. At the level of numbers, I have been more successful than in other stages.
It shows that you can reach the best level in the race after 30.
The age issue is a bit more in doubt. More and more players are seen reaching the peak of their career performance with greater age. Globally, I feel better than seasons ago. We have a very clear example with Nino, who at 40 was a very important piece week after week last season. In this one, you are having fewer minutes, but it is still just as important. Two seasons ago, I coincided with Rubén Castro, who at 39 continues to score goals. I am happy to add with 31 years.
What roof is put up?
You have to try to improve day by day. Hopefully I can be with Elche in Primera next season. I am sure we will achieve the goal.
What is Bragarnik like?
Pretty close. I’ve gotten to know him better this season by being one of the captains and going to various meetings. There is a lot of communication, he tries to facilitate everything on a day-to-day basis and has the door open. You have a very clear idea of ​​what you want. The promotion has catapulted us and if we save ourselves the club will continue to grow a lot. His idea is that the club consolidate in the First Division and make it one of the greats in Spain.

Barça ensures the continuity of Nico González until 2024