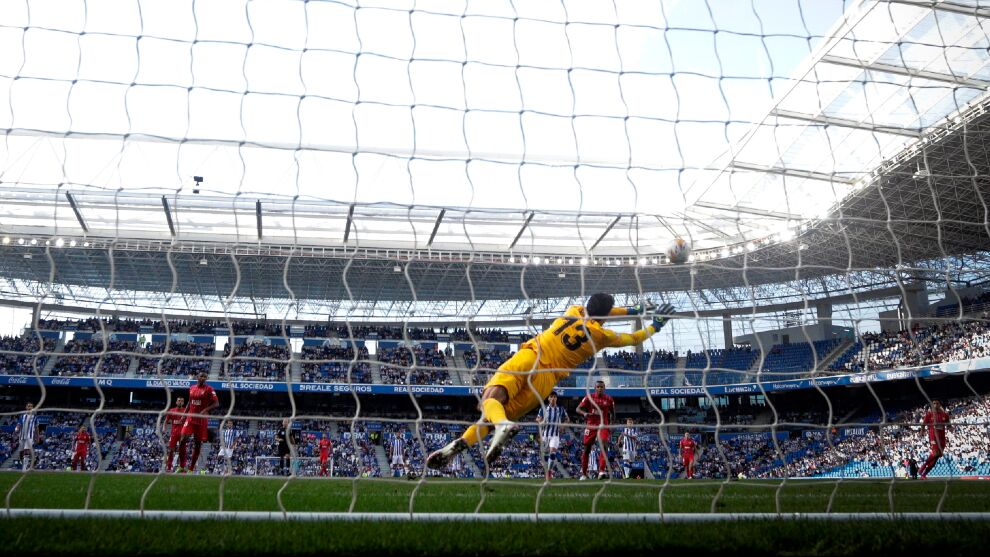 “We endured both players until the end and I was able to stop him”. Bono is not overly fond of spotlights. Each performance of the Sevilla goalkeeper usually ends up on display, which does not speak excessively well of the moment his team is going through, although the team feels wonderful to play with a safety net in the goal. And more in a week where they have shot him from eleven meters. Up to four penalties against. He only had to take one out of his goal.

Because Bond He is a consummate expert under the sticks at maximum penalty. Has stopped three of the last six that Sevilla has suffered in the League and in Champions he pushed the pitchers – guessing the launch – to hurry and not score. Bono raises his fist. A quiet and studious hero of penalties, especially before those experts who endure until the last second to decide where they want to place it.

No goalkeeper had stopped Oyarzabal a penalty in the League. He had scored 25 and on only one occasion had he thrown it out. Bono held on and stuck his foot out. Something similar to what he did with Raúl Jiménez (Wolverhampton) in the quarterfinals of the Europa League 2020. The Mexican had not failed in the previous 24. Bono stopped him. His teammate Ocampos helps him with the same way of throwing in training. And when push comes to shove it is Bono who knows where the ball will go.

“Because of how the game was played, I think the most fair thing was the draw. We have to improve, we are aware. In the first half they beat us and we couldn’t get out of their pressure. In the second we were better and we had some chances “, described Bono at the end of the match. Sevilla does not play well. Many of their players are going through a bad moment of form and the team pays for it. Lopetegui needs to readjust things and give the team a spin. Less to the goal, where he has life insurance.

Valencia will have 29,000 fans in Mestalla for the duel for the lead against Madrid