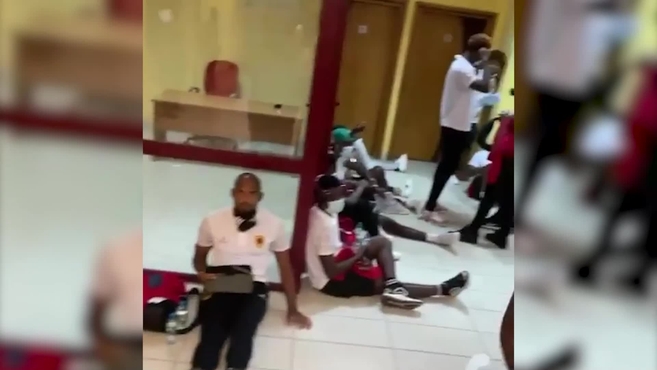 ANDl player of the Valencia Hélder Costa got rid of a very nasty lock at El Hadj Omar Bongo Ondimba Airport de Franceville (Gabon), according to already formally denounced the Angolan Football Federation (FAF). During the expedition was more than six hours of the Angola team locked in the baggage claim hall “no air conditioning or chairs to sit down, “they explained to local media FAF authorities.

It all happened this Sunday, when the Angolan team had already landed at the Franceville airport, the city where the Monday the game against Gabon, from qualification for the World Cup with defeat (0-2) for Angola. The only explanation they were given was that they had to undergo a PCR by local health authorities. “We can’t leave because they say it’s coming a health team, but it never comes. They have placed soldiers around the airport so that we do not circulate, that is absurd, “the FAF vice president warned while the events were taking place.

Antonio Muaxilela, Director of Communication and Marketing of the FAF confirmed the complaint, according to the Jornal de Angola: “The African Confederation has all the information, because they continued and they know everything that happened in Gabon, through videos and images. Therefore, any decision can be made. ”

Apparently the origin of this incident is in the match played between both selections in Luanda, three days before, with victory for Angola (3-1). The match was delayed an hour and a half because the FAF wanted the Gabonese national team to subjected to covid tests before the meeting. Finally, according to the same media, the FIFA authorized the match to be held when they considered valid the tests that accredited the results negatives before traveling.

The selector Pedro Gonçalves already suspected that they were going to suffer reprisals in Gabon: “It is regrettable, we knew they were going to complicate us. They threatened us in Luanda, saying we would suffer reprisals for having demanded that they present their evidence before the game. FIFA and CAF have to intervene “He reported from the airport when he still did not know how long the forced confinement would last.

Finally, after about six hours, when it was already dark, they were allowed to get on the buses that they transferred to the concentration hotel. The Luanda media reports that the expedition was able to have dinner at 1 in the morning, the night before the meeting.

Father for the second time

Born in Luanda, capital of the former Portuguese colony, Hélder Costa decided last season to accept being called up with his country’s national team of birth, although from a very young age he lived in Portugal and his entire football career He developed it in the Iberian country. In fact, He made his debut with the Portuguese national team, but being a friendly he could wear the jersey of another team. However, despite being summoned in two different occasions, Coast has not yet debuted with the Angolan national team. He did not do so in March, when he was first called, nor has he done so now, since did not get to join the concentration. Hélder Costa had to return to Valenciabecause of a problem at the Frankfurt airport. For this reason, got off a nasty ride for the Angola team. And, in addition, it has allowed be in Valencia for the birth of India, his second daughter, as he himself has spread through Instagram.

Simeone’s confession before going to Atlético: “Where there is mud, I stick up to my head”