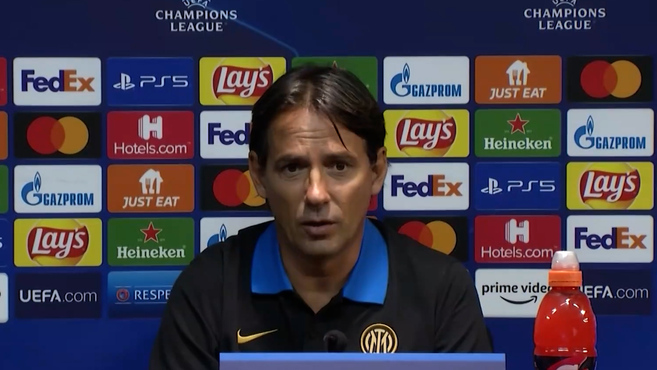 Simone Inzaghi, Inter Milan coach, assured this Tuesday that his team will have “special care” this Wednesday with the Brazilian Vinicius Junior, Real Madrid winger, in the San Siro match corresponding to the first day of the Champions League.

Without a doubt, we will take special care with Vinicius

“Vinicius lives a great moment, but if we only look at him, we will forget about Benzema, Hazard or Rodrygo Goes. But without a doubt we will take special care with Vinicius “Inzaghi said at the press conference prior to the San Siro appointment.

Vinicius arrives in great shape, after scoring four goals in the first four matches of the Spanish League, including one last Sunday against Celta Vigo.

Vinicius is living a great moment, but if we only look at him, we will forget Benzema, Hazard or Rodrygo …

“We know that the final minutes are always important and against Real Madrid we will have to be vigilant. They have great dribblers and we must know how to handle them as long as possible. We will play with the knife between the teeth and We hope to have one of our best nights in front of our fans. We have recovered from the Genoa game and we are thinking about preparing as best we can for a difficult game, “continued the coach, analyzing the match.

Inzaghi acknowledged that He is concerned about the European experience of Real Madrid and also the long and successful journey of coach Carlo Ancelotti, for which he has a sincere appreciation. “I am concerned about the organization that Madrid has. We also saw a great team with Zidane, who won in Spain and in Europe. Carlo always gives a good offensive game to his team and at the same time it gives a lot of organization. We have to concede as little as possible, “he said.

I am concerned about the organization that Madrid has

“Ancelotti is one of the most successful coaches in the history of football. He is a great coach and it is a pleasure to talk about football with him. He knows how to give his team a lot of organization, “he insisted.

Despite the fact that Inter has eleven years without being a protagonist in the Champions LeagueInzaghi expressed his confidence in his players, who have a “great opportunity to write a great page” of their history.

“Experience is very important in these games. We know that the group is not easy, because, besides Madrid, there are other teams (Shakhtar Donetsk and Sherif Tiraspol) that will give everything to put us in trouble “, he assured.

“Personally, Between the Europa League and the Champions League, I think I have already reached 50 games, so it is normal that Ancelotti has more experience than I do. What I can say is that we are trying to prepare the game in the best way, to play aggressively. It will be great to play in front of our fans, in a stadium like this (San Siro), “he added.

Regarding the physical conditions of defender Alessandro Bastoni, who missed the last league match due to injury, Inzaghi said that he will do some rehearsals in the next training sessions before making the final decision on his presence in the eleven that will face Madrid. “I’m going to see how he is. He wants to play. Yesterday he trained with a low rhythm, today he will have to force more and we will see what answers the boy will give, “he said.