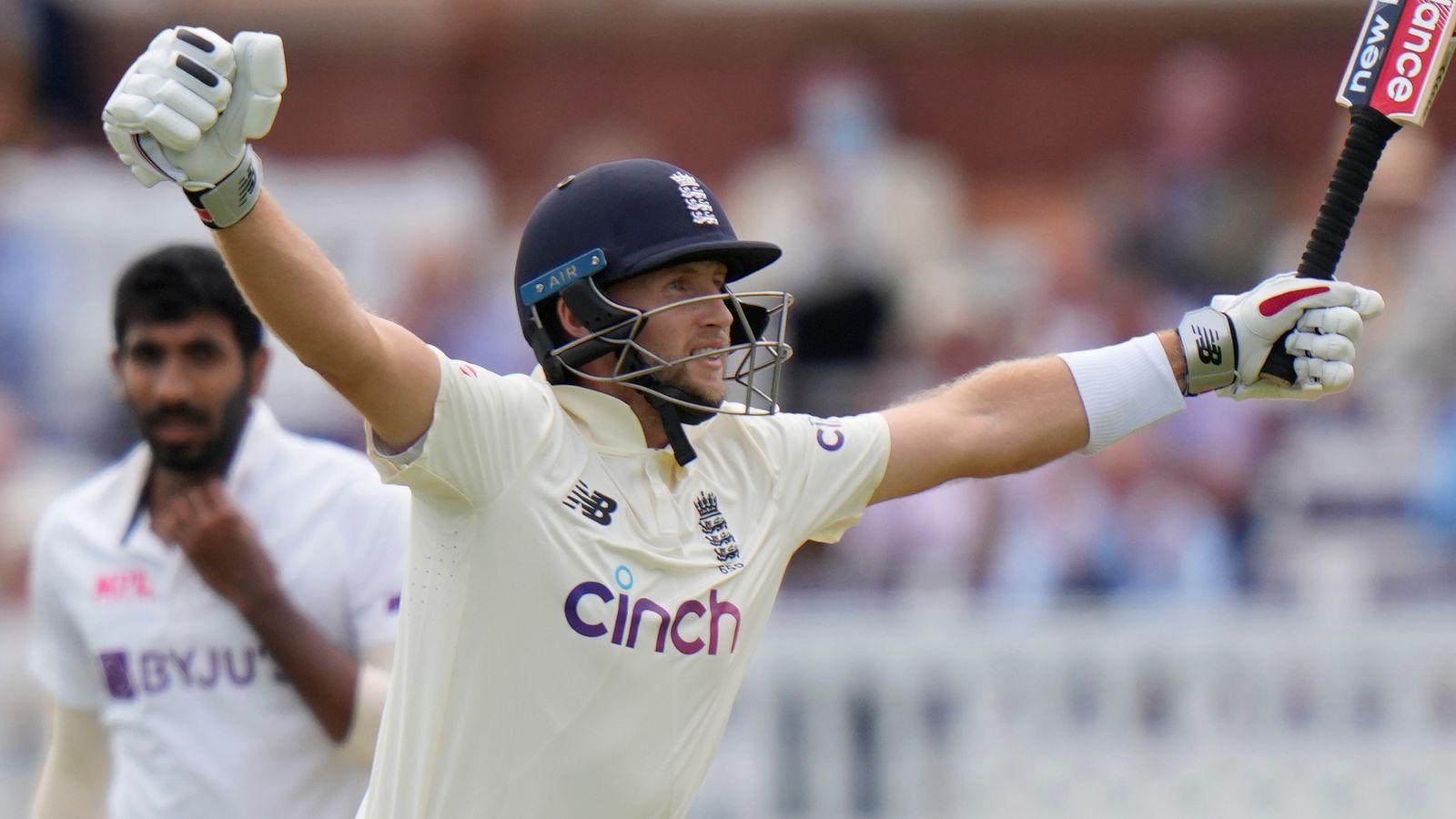 Joe Root reaches a 22 test century, achieving a score of 11 out of 150 more; Root passed 9,000 tests in the process, while his five centuries in 2021 is only the seventh time an England hitter has done so in a calendar year and the first since Ian Bell (2011).

An imperious and undefeated 180 from England captain Joe Root earned his team a 27-run first-inning lead over India on stumps on the third day of this fascinating second test.

Root made the most of ideal batting conditions, with Lord’s bathed in sunshine, to raise his 22nd test ton, and fifth in the calendar year, before going past 150 for the 11th time in his test career.

Root shared significant associations with Jonny Bairstow (57), Jos Buttler (23) and Moeen Ali (27), but the middle order trio will be aggrieved for not having cashed more, particularly Bairstow, who hit wonderfully at 121 with his pattern. before being brought down by Mohammed Siraj (4-94).

Moeen’s firing also derailed the innings a bit later in the day, as he and Sam Curran fell to back-to-back deliveries to Ishant Sharma (3-69), while Ollie Robinson (6) departed shortly after with the hosts still seven runs. below India’s score.

But Root held on, seeing England up front and extending that with some T20-style fun at the end (a sensational reverse ramp four off Siraj, the standout) before the innings ended when James Anderson was pitched by Mohammed Shami ( 2-95) with the final ball before closing.

Previously, Root had hit the first of his many milestones for the day in the second lap as he led Siraj away by four points to move up to his fifty, though it would be Bairstow who would largely dominate the rest of the morning session, competing for a half-century of his own: a pair of classic hitches slammed into the fence to emphasize its excellent form.

Eager to force a much-needed breakthrough, there would be a shift in India’s focus after the interval, with some short pitch bowling unsettling the England pair and ultimately bringing Bairstow down. Siraj, pitching from around the wicket, struck another half of the way and the ball grazed the batter’s glove as he looked to hook and loop Virat Kohli on the slip.

Buttler was next, still looking for form in the red ball format. He survived a loud lbw scream from Ravi Jadeja when he was at 1 and was also fortunate not to be exhausted when Root called him up for the single that would bring his century; a direct hit could well have been a backdrop for England’s wicketkeeper.

Root had more control when he drove four behind Jasprit Bumrah later in the afternoon session to take him past 9,000 test runs, while Buttler finally started to settle in and sent a pair of flashy units over the edge.

But, shortly after the fifty-fifty association between the couple emerged, Ishant pushed one up the slope from End Pavilion and back to Buttler to throw him through the gate.

Moeen was a bit cranky starting his innings, playing and failing multiple times as he scored just one solo single from his first 20 installments, but a four with a punch on the covers to bring up the England 300 finally put him on the spot. March.

Meanwhile, Root continued on his merry way and passed 150 shortly after tea with four flashes through the slips. Ishant, the unfortunate bowler, would be rewarded for a good spell soon after, as Moeen and Curran got nearly identical deliveries.

Angled from around the wicket, on a fourth stump line, Moeen’s just cut a bit more, caught by Kohli on the second slip, a low possibility, controlled by the third referee, while Curran sent his best to Rohit Sharma to the beginning.

He left Root tasked with facing a hat-trick delivery for the second day in a row when Ishant returned, but the England captain, with such a sublime touch, dismissed him without issue.

As England moved on and ran out of partners, Root had a bit of fun at the end of the day, certainly more than James Anderson at the other end when he was hit in the helmet by Bumrah in the middle of a bombardment. of gorillas, before being thrown by a 16 ball duck: England with 391.

Watch the fourth day of the second test between England and India at Lord’s from 10.15am, Sunday on Sky Sports The Hundred.