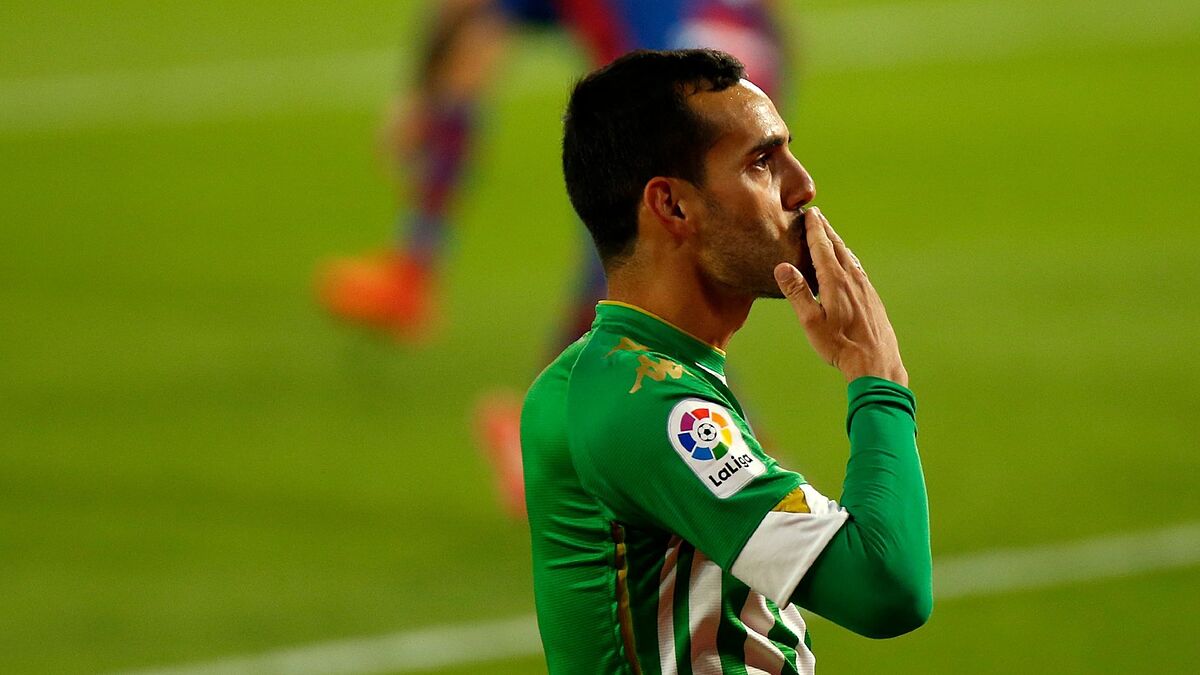 The Coín striker, having overcome his foot problems, has regained his scoring nose under Pellegrini’s command

Juanmi Jimenez, forward of Betis, has passed this noon through the microphones of Radio MARCA Sevilla to analyze how his second season at the Verdiblanco club is being, in which, fully recovered from the injury that affected his first year in the entity, he begins to see goal regularly.

Finally recovered from his injury

“Yes, the main thing was to be physically well, that the injury was left behind. Now I am being able to enjoy and feel important, which is what counts. I had never been injured, my first injury was when I arrived here, a year and a half with ups and downs, That it seemed that it was starting, that it was not, the operation, that it seemed that it was not the solution … It was an injury that has had me a little psychologically stunned, with many ups and downs. But I have already gone that way and now, enjoying it. “

“The team is in good dynamics, we are where we wanted to be. We are working well, we are eager to continue scoring three at a time each week and that is what we are going to try.”

“That is what the perseverance, the work gives you. The team never stopped doing it. We went through a time when the results did not arrive and when that happens the confidence is not the same. But the team has been finding each other, gaining in confidence and it is in a good dynamic that we hope to prolong over time “.

His success in the final stretch of the matches

“When you’re on a positive streak, being alive in the games gives you options to fight for the three points. That didn’t happen before, we didn’t get to the final stages of complicated games alive and that’s how it’s difficult to win.”

“Yes, we know that one of the main things is not to fit in. The team is going to generate chances and the most normal thing is that in some cases we are right and get that goal. It is an accumulation of work that the team does every week and it is being seen reflected “.

A change after the January derby

“I don’t think it was the game on time. The team has been working well, but if you don’t have results and victories, it is not reflected. In 2021 we started quite well, with good dynamics, and from there we have been consolidating it. Hopefully we can. extend it over time. “

The figure of Pellegrini

“We already know how this for the strikers works … They are streaks, dynamics, last year the goals were scored by Loren and Borja did not have that luck, this year due to circumstances he has started to do them and when that happens and he has confidence everything goes further They are dynamic, when one enters you, your confidence rises and everything goes much better. “

Ambition to fight for fifth place

“We are in the positions we want and from there, we will surely have to compete with Real and Villarreal. The objective is to add three points every week so that after these 10 games we will be as high as possible.”

The Real Sociedad, rival for Europe

“Yes, I wish him the best of luck in that great game they have, playing in a final is something very nice, and hopefully the fatigue will make the League cost them a little more.”

“When the team is working well, with good dynamics, losing the derby was a hit, but the team did not accuse it. We knew that the game against Levante was very important for us, to go to the break in the area we want. And There is no better way than to leave these days with a victory. Now we have two weeks to work and prepare for the Elche game, which is another important game in a difficult field. “

They don’t do the math

“No, in the end, doing the math is useless. You have to go out every week to compete, to get that victory, and at the end of those 10 games we will do the math.”

Appearance of Fekir and Canals

“Yes, both Nabil and Sergio are two great players, very important for the team. Having them with confidence, the team appreciates it, they are players who make a difference and generate the chances that make you win the games.”

The Coliseum stands explodes at the end of the match