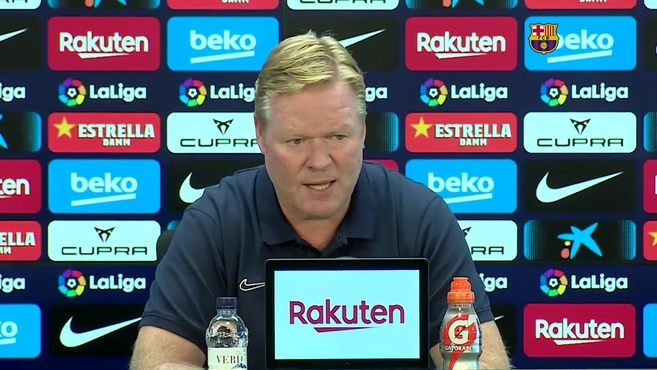 ROnald Koeman celebrated the return of Ansu Fati to a call-up after having been in the dry dock for almost a year. The Dutchman, yes, warned that he will have little prominence in these first games and that, at most, he will play a quarter of an hour. In addition, he regretted his expulsion against Cádiz and commented on how things are with Laporta.

“They are very important. We are talking about players who can play on the wing, who have one against one and who have speed. That always makes it more difficult to defend. On the wing, where there is room to do damage, it costs us. We have full-backs who They play as wingers, but they are not. Since the beginning of the season we have done many things. As a coach, I have accepted player departures for the financial good of the club. “

“There is a long way to go before he is as he has been. He does not recover in two games or in two weeks. We have to be attentive to help him. The most important thing is that he recovers. It depends on his state. We have to have this very directed with him. medical staff. We are talking about a young man who will give us a lot of quality, but little by little “.

“There are players who are effective in their game. Memphis feels very responsible for not having scored in the last game. It does not have to obsess over that. It must continue playing as it is playing. Against Cádiz we had 4 or 5 very clear. looking for effectiveness, but also knowing that we need players with more goals. This costs us. Creating, above all. We know that we have lost players who had that effectiveness. We must not forget. “

“There are very good young people, with a great future. It could be that Gavi will play tomorrow, of course. It is a possibility because we only have 17 available outfield players. We have plenty of central players, but in other positions we have almost no one. attack, up, we are very limited “

“The president can speak, he is the most important man in the club. I have no problem. I am involved in my job, I have to win games. The rest does not interest me.”

Piqué and the calendar

“I have to learn from this. Be calmer. Think about the team and the game. I am also human and there are moments in games where it is difficult to accept decisions. There are things that it is better not to enter because I cannot change them. “

“I can’t say much about this issue because I haven’t been involved in reading the press for a long time. I know the rumors out there, but all we have to do is win games. There are rumors, names … It’s your job. I don’t I’m going to waste energy on things I can’t control. “

Reactions to your release

“Since that day nothing has happened. We were talking on the plane about the Cádiz game and there is nothing else.”

It’s very important. First for the player, we have a plan and we follow a plan to be able to fully recover Ansu. You will have a process to have minutes. He is called up and will play a maximum of 15 minutes. The most important thing is to recover the player well, not to run fast “

Modric 2022: the new challenges of the Croatian genius