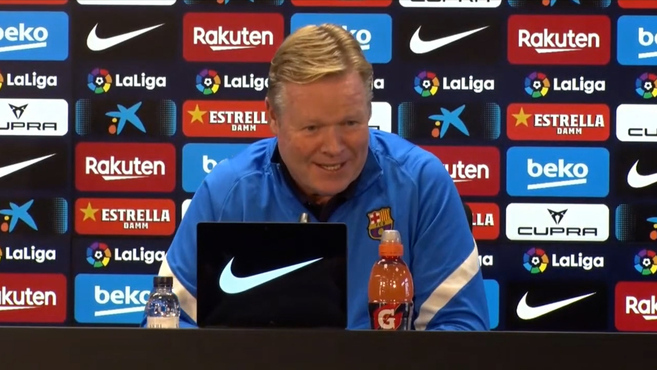 Ronald Koeman believes in the possibilities of his team facing the game between the Barcelona and the Real Madrid of this Sunday. The Dutchman moves away from victimizations and, although he does not see a clear favorite, he also does not believe that his should go with a pessimistic thought.

“Good possession, looking for depth. I don’t think many opportunities will be created. It will be a matter of being effective. Each one must get the best of himself for a game like tomorrow’s.”

“To know it, you have to play it. We have enough who have already experienced them to help them. It is to enjoy a pleasant environment. Play with personality and do your job”

“Neither we to them nor they to us can be surprised. They both analyze the rival and know what to expect. They are a very experienced team, with great players. For us, possession will be important. They play well against. We have to be there. well organized when we have the ball and lose it. You have to control their counterattack “

“It does not depend on a single game. It is true that we had a very important week. It may be important, but you have to be prepared for everything before any game”

“It is important, especially for ourselves. It gives confidence. The players work hard every day to win games and improve things. It is an important game that we want to win. This has to be shown.”

“If I have to answer this before each game … For me, it is not necessary for the president to say this every week. Things are clear. I feel supported, but I know that everything depends on the results.”

“You can’t have more, I think. I know this is part of being a coach, there’s no problem. I know the importance of the Classics. I won them and lost them as a player. You have to see the positive side of enjoying yourself. For me it is my first Clásico as a coach and with an audience. It will be totally different. You have to be excited “

“We have spoken, yes. We are clear that we must mark the second to be able to be calm”

Who has the best squad?

“I do not know. There is a difference in experience, although we also have experienced players. We are more or less the same. There are details in which they can be better and others, us. We are trying to get the most out of it and I don’t see a favorite for tomorrow.”

Are they that bad?

“It’s true, but first you have to win the Classical. We know that a result in a Classical, everyone notices.”

“I do not think it is a duel between players. They are both young and have to show a lot. As I said the other hates, you have to leave Ansu a bit calm, let him recover. You do not have to think that this is just Ansu. part of a team where he can make a difference. He has to work and improve “”

“He had discomfort and has trained normally. He is here to play”

“I don’t know if people have that mistrust. We don’t. We know what we have and what we can do. We play at home, I’m not afraid.”

Who plays the most?

“We both play a lot. We can get ahead. We remember the memory of last year. Many things can happen. It would indicate the moment for both teams.”

“I don’t think something like this can be concluded after a Classical. There is a lot of season ahead after the game. Bayern’s game was different from this one. We can show that we are on the right track. And the result is very important. We have to play. without fear, show that we can win and have desire from the beginning “

Importance of the appointment

“We have won two games. It is having a good feeling. It is a great game that we have ahead of us. We are very excited to play. Hopefully we will have a full or almost full field. With a great atmosphere”

The signings of Randy Nteka and Pathé Ciss for Rayo, closed

Imanol: “The victory is deserved and fair, but we need more goals”