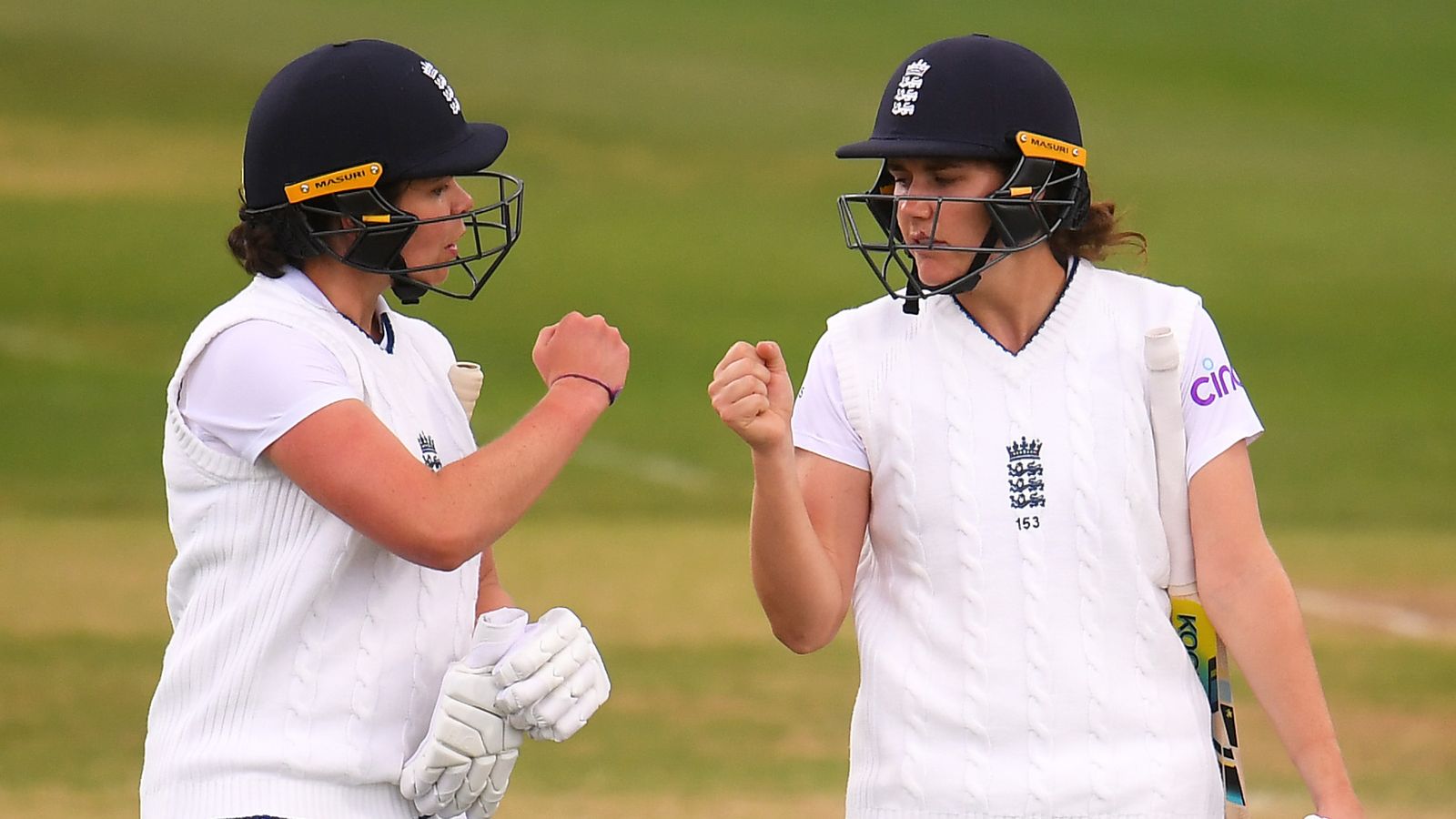 Nat Sciver and debutant Alice Davidson-Richards hit hundreds of hits as England rallied from a batting collapse to carve out a first-inning lead over South Africa on day two of the one-off test in Taunton.

Sciver (119th) and Davidson-Richards (107th) joined forces at 121-5, at which point England trailed by 163, with the hosts losing 5-56 once Tammy Beaumont and Emma Lamb broke the opening salvo of 65 runs.

But after all, England had moved to a 44-run lead at 328-6, with Sciver and the Davidson-Richards sixth-wicket partnership reaching 207 before the latter went to the last ball of the day.

Vice-Captain Sciver surpassed her previous best Test score of 88, set in Taunton against Australia three summers ago, and went on to hit triple figures of 182 deliveries when the races came at a canter after tea.

Davidson-Richards reached the milestone even faster, from 173 balls, as she became only the second England player to score a century in her first Test innings, after Enid Bakewell in 1968.

The 28-year-old is also only the second England Test debutant, male or female, to compile a hundred and take a wicket, after WG Grace in 1880, a feat that Jamie Overton narrowly missed out on in the men’s Test. last week against New Zealand at Headingley when he fell by 97.

South Africa’s dominance in the women’s event faded as they launched their spinners before the second new ball and England milked runs, while the tourists splurged on fresh Dukes later in the night.

Sciver and Davidson-Richards plundered 152 runs from 38 overs in the final session as England topped South Africa’s 284, with the late dismissal of Davidson-Richards, caught on Tumi Sekhukhune’s point back, only taking a small amount of shine. off.

South Africa had moved into a position of real strength following the post-lunch exits of Heather Knight (8), Sophia Dunkley (18) and Amy Jones (0).

England captain Knight was left without the first ball of the afternoon session, stuttering after Sciver called her out for a risky single that left her with no ground at the keeper’s end.

That wicket ended a nervous tackle from Knight, who was brought down before half-time by South Africa captain Sune Luus on the slip, with Luus put off by wicketkeeper Sinalo Jafta lunging at her.

Dunkley and Jones then fell in the space of two overs: Dunkley cut a full, swinging ball from Anneke Bosch (3-59) behind as the closer added to her previous scalps from Beaumont and Lamb, before Jones received the sixth ball. when spinner Nonkululeko Mlaba skidded a delivery.

Sciver had a couple of scares before reaching 20: Jafta staggered down the side of the leg as a big opportunity passed before the batsman passed Lizelle Lee in the ravine.

But all was quiet after that, as the England vice-captain reached hundreds of consecutive caps after her triumph against Australia in the over-50 World Cup final in April.

Davidson-Richards’ only previous experience in England was six white-ball internationals in 2018, but he showed no nerve in test whites.

The all-rounder was particularly effective driving and carving offside, just as fellow debutant Lamb had been earlier in the day during a much shorter inning of 38.

Lamb hit five fours in total before Bosch lobbed her through the gate down the road, and that wicket came four overs after Bosch caught Beaumont lbw with an in-swinger.

Alice Davidson-Richards, speaking with sky sports: “I literally don’t have the words, it was ridiculous! I thought it would make me more nervous than I did. It was really special and nice to have someone I’ve known for God knows how long be so relaxed. That helped me.” the way.”

Nat Sciver, speaking with sky sports: “I bet there are some good shots of Alice’s face today! I think I was more nervous about her century than mine! For Alice to fit into the team and play the way she plays, it’s a dream debut.”

Watch day three of the LV= insurance test between England and South Africa live on Sky Sports on Wednesday. Coverage starts at 10.30am on Sky Sports Cricket and Sky Sports Mix with the first ball at 11am