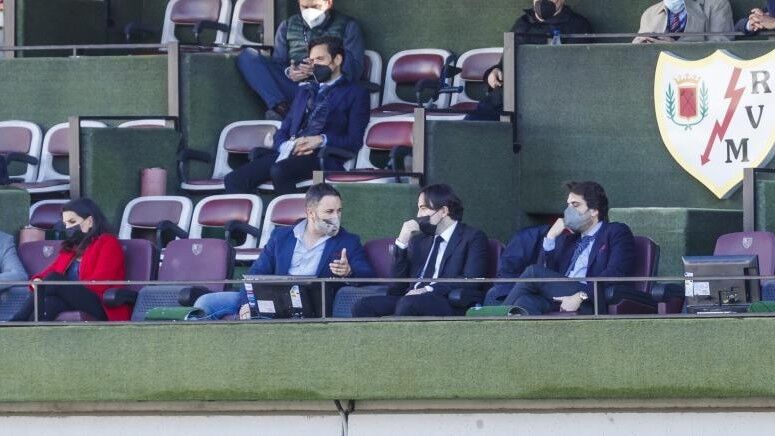 It is scheduled for this afternoon, starting at 7:00 p.m., to show its discomfort with the directive

Lto ADRV platform, which includes the vast majority of Rayo Vallecano supporters’ clubs, has called a protest for this Tuesday at the gates of the stadium to show their discomfort with the board chaired by Raúl Martín Presa due to the presence of two VOX leaders in the box in the match played this Monday against Albacete.

Santiago Abascal, President of VOX, and Rocío Monastery, candidate of the political party for the presidency of the Community of Madrid, witnessed in the box, together with the Rayista president, the match against Albacete, which ended with a tie (2-2) between Rayo and the La Mancha team.

It seemed good to me, because Rayo is a team open to all

Martín Presa, in statements to EFE, justified the presence of both by saying that both Abascal and Monasterio “called saying they wanted to come and showing interest” for attending a game.

“It seemed good to me, because Rayo is a team open to all and Vallecas is a neighborhood that welcomes all the people, “declared the Franco-red president.

As a sign of rejection for that visit to the Rayo stadium by the two VOX leaders, the Rayo fans have called a protest for this Tuesday, from 7:00 p.m., at the gates of the stadium, under the motto ‘Let’s disinfect our stadium. Let’s clean the box. ‘

Tebas: “They accuse me of wanting to dominate football, but there are others who surpass me”

Simeone: “Favorite for the title? Being one of those involved in the fight, it would be unfair not to say us, so I don’t say anything”