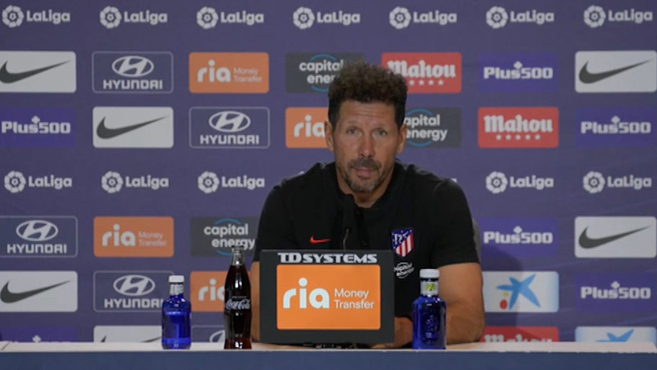 Diego Pablo Simeone analyzed the duel against Elche (Sunday 7.30 pm) by Fran Escribá. The rojiblanco coach did not want to be distracted from the game and avoided talking about possible incorporations. He was very excited about the return of the public to the stadium.

Luis Suarez: “He was one of the last to arrive with Trippier, Correa and Lodi. The four of them are working very well. Correa already played 60-70 minutes, Luis played about 30 like Trippier, Lodi also participated … They evolve with each training session. of the days will be reaching the best form. The time that can play we will see tomorrow depending on the needs of the team “

State of form: “All the coaches have to go looking for the best form of the players. We much more because we have many players in the national teams. Look for the best for each game. To assess what is best for the team. In that we are analyzing with the preparation physical”

Arrival of a ‘9’: “The club works in consequence of what we have been talking about since LaLiga ended. There are days to finish the market. And surely soon they will find out if something happens or not, and depending on what happens they will find an answer to the question”

Return of the fans: “Starting a Sunday morning with your family, friends … to go to the stadium is something wonderful. After a year and a half without having this possibility. Many people tomorrow will be able to meet friends and family enjoying something that they like the way football is. We need our people. The fans need football and we need them, who are football. “

Did you miss the fans ?: “The soul of our people has always been there. Tomorrow little by little people begin to return to the field. I imagine people in the morning commenting that they are going to see Atlético de Madrid and that generates energy”

Elche: “Since the arrival of Fran Escribá, the team has been much more specific in its search to generate points. This season it has opted for another system in the preseason and at the start of the League, a system that will surely benefit its forwards”

Griezmann: “We are focused on the Elche party. I understand that the news of whether one or the other arrives is important for you, calm down. We are busy with the Elche party”