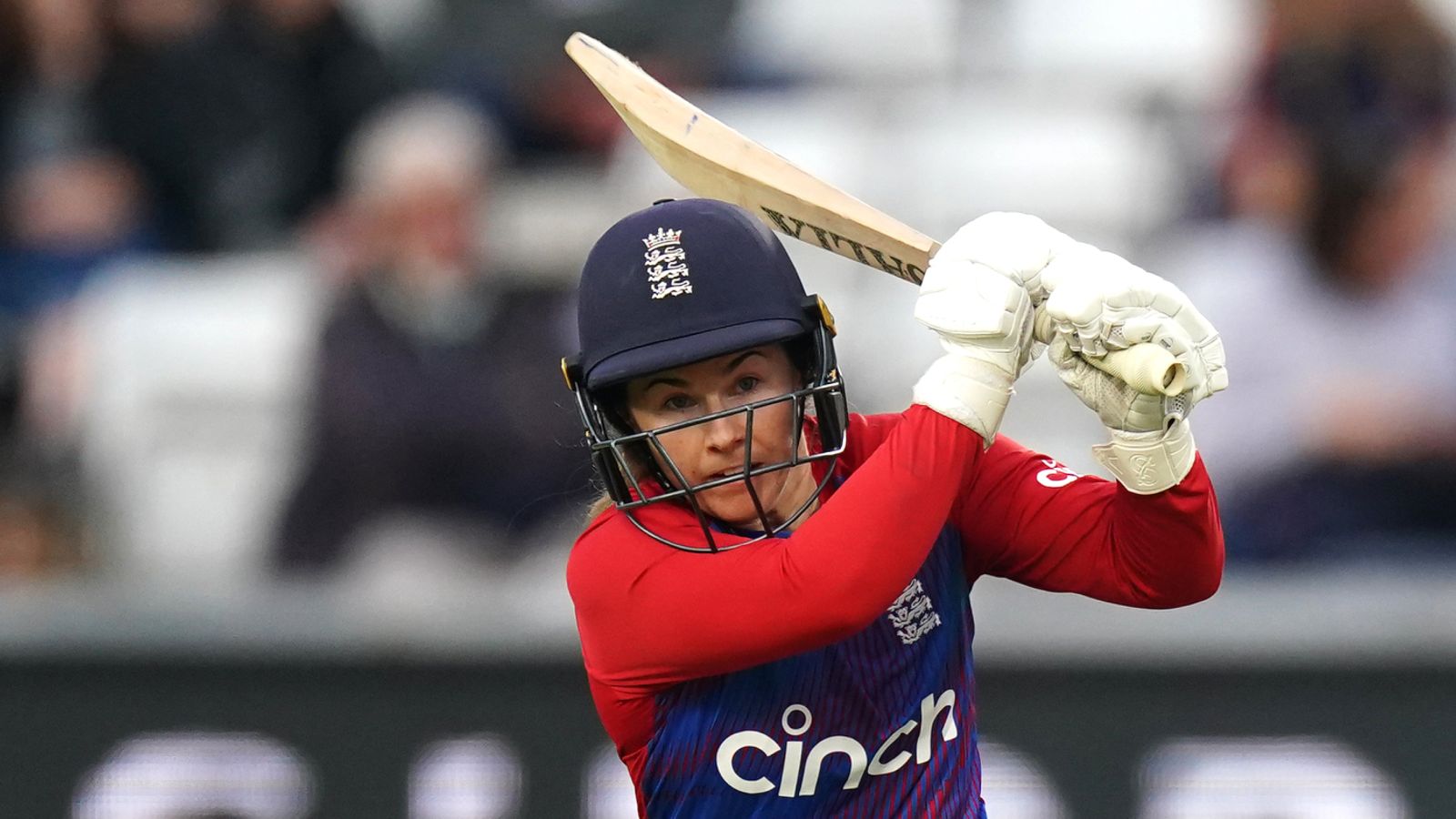 Beaumont made 97 of 65 balls while England were 184-4 of their 20 overs; Katherine Brunt, Sophie Ecclestone and Sarah Glenn each claimed two lots to wrap up a dominant display

Tammy Beaumont produced a sensational inning to inspire England to an emphatic 46-run victory over New Zealand in the first T20 international at Chelmsford.

Beaumont scored a brilliant 97 of 65 balls to guide England to a formidable 184-4 total, as the White Ferns endured a punishing afternoon in their first competitive outing since April.

Beaumont took advantage of a wasteful display from the visitors, while Amy Jones (31 of 15) and Sophia Dunkley (23 not) made valuable cameos as England posted their highest T20 score against New Zealand.

The hosts, who debuted with Thunder’s Emma Lamb after captain Heather Knight was ruled out with a hamstring injury, denied New Zealand a chance to inject momentum into their racing pursuit, leaving the visitors out. of 138 in the 19th.

England had won nine of their previous 10 starts at Fort Chelmsford, and Beaumont and Danni Wyatt got off to a spectacular start in front of a sold-out crowd, running 33-0 in the third round.

Having dispatched Leigh Kasperek (1-54) for three consecutive limits, Wyatt (14 of 8) was ultimately duped by a 41 mph delivery, while alternate captain Nat Sciver (14 of 16) was subdued by his standards. explosives, succumbing to Hayley. Jensen (2-26) in the 10th change.

The game was balanced with the hosts 74-2 mid-stage, but Beaumont and Amy Jones rampaged in a remarkable pace of the game, registering 36 runs in two overs to put up a beleaguered New Zealand attack to the sword.

Jones displayed tremendous innovation in his enterprising 15-ball hit, while Beaumont unleashed a series of glorious shots over additional coverage, with the pair compiling a third wicket of 53 out of just 25 deliveries.

Jones’ firing did little to quell England’s momentum, as Sophia Dunkley (23 not) provided an effective contrast to the irrepressible Beaumont, who continued to hit the edge with consummate ease, only to be agonizingly short of her century in the penultimate ball of the inning.

If New Zealand harbored any aspirations to complete a record chase, they needed fireworks from the decorated duo of Suzie Bates and Captain Sophie Devine, and that didn’t materialize.

Tash Farrant (1-24) marked her return to the international stage by catching Devine (2) lbw to complete a maiden on her first over, before Katherine Brunt (2-9) hit Bates (1) cleanly to leave the visitors. reeling at 4-2 in the third.

The third-field partnership between Amy Satterthwaite (43) and Maddy Green (19) showed promise, until an outstanding catch from Farrant represented Green.

New Zealand continued to lose ground at regular intervals as the England effects duo of Sarah Glenn (2-24) and Mady Villiers (1-17) opened their accounts, before Villiers took a superb jump catch from Brunt to sack Satterthwaite seven runs from her. half a century.

The White Ferns were in danger of being defeated at 82-6, although their lower order offered up a spirited resistance, with Jensen (16), Thamsyn Newton (14), Jess Kerr (12 not) and Hannah Rowe (11) all reaching the double. figures.

However, this simply delayed the inevitable as Sciver (1-31) and Sophie Ecclestone (2-24) attacked in the final stages to complete a full night’s work for England.

Nat Sciver: “We have played a lot of cricket in the last three months as a team and I think it showed. There is room for improvement, but I think today it showed that we have been on the field quite a bit.”

“The consistency of the areas we hit with the ball was a bit poor, but we were clinical and managed to cross them out so you don’t get too angry.”

“We were pretty special with the bat. Tammy was obviously so close to a hundred, but I’m sure she will do it again. I think she likes hitting heavy metal, so we asked the band to come to Hove. [for the next T20I]! “

Sophie Devine: “I think we filtered too many runs and the fielding obviously didn’t help, when I dropped two catches!

“But the credit must go to Tammy Beaumont, she hit superbly and probably got away from us. I thought Hayley Jensen was outstanding on the ball.

“England have come out of a full summer playing cricket and there isn’t much training and warm-up you can do before you get in the middle.”

Watch the second T20 international match between England and New Zealand, in Hove, live on Sky Sports Cricket from 6:45 pm on Saturday.