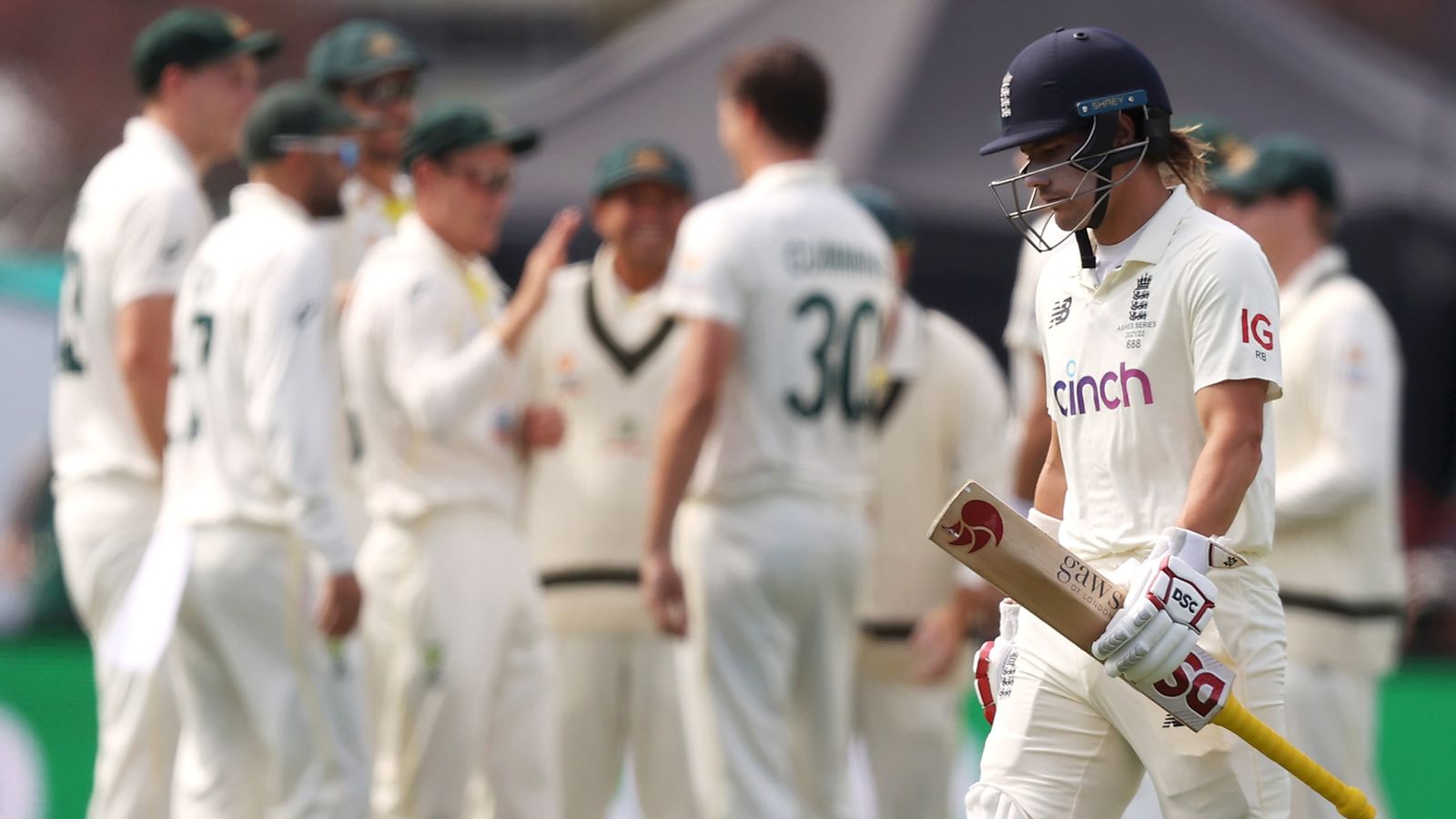 Australia closes 37-3 after the second day of the fifth Ashes Test in Hobart; England struggled with the bat again when they were eliminated for 188 in response to the hosts’ first-inning 303; Stuart Broad becomes England’s leading Ashes wicket-taker as tourists claim three late wickets

England face a battle to avoid another Ashes defeat after their latest batting drop despite late wickets giving them a glimmer of hope in Test 5.

Having beaten Australia 303 in just under an hour on day two in Hobart, England found themselves back on the field for the final hour and 25 minutes of the third session after succumbing to 188 in 47.4 overs to relinquish a top spot. . – Innings deficit of 115.

Pat Cummins claimed 4-45 and Mitchell Starc 3-53 as the hosts made regular strides with only Chris Woakes (36) and Joe Root (34) reaching 30 despite multiple players starting.

Stuart Broad sacked David Warner in the first over of Australia’s second innings, the first match Australian bagged a par, to become England’s leading Ashes cricketer, beating Sir Ian Botham, and when Woakes knocked out Marnus Labuschagne it was 5-2.

That became 33-3 when Mark Wood caught Usman Khawaja with a fearsome delivery, but Steve Smith (17th) and Scott Boland (3rd) held their own to overcome the hurdles as Australia went 37-3, a 152 lead.

The day began with England needing four wickets to wrap up Australia’s early innings and got off to a positive start as Wood (3-115) used the short ball to good effect with Starc (3) and Cummins (2) caught on the tug.

At the time, Australia was 252-8 and 300 seemed a long way off until Nathan Lyon, unfazed by the previous two dismissals, took on Wood’s goalkeepers and hit three big sixes in a tier of 28 with Alex Carey (24 ), who was then brought down inside by Woakes (2-64).

Lyon and Boland put together another 23 between them to add to England’s frustrations before Broad (3-59) finally dropped the latter for 31.

Then came the now customary England struggle with the bat. The remembered Rory Burns (0) was the first to go, running after an errant call from a quick single by Zak Crawley and a direct hit by Labuschagne, although a dive could have been enough to save the first set.

Crawley (18) showed more of the elegant striking game that brought him a half-century in Sydney, but he would not repeat himself when an inside edge bounced sharply off his pad to the short leg, where Travis Head reacted quickly to raise his hands and take the catch. .

Dawid Malan and Root made it to the dinner break and after the former survived a thin inside edge behind Cameron Green thanks to the referee’s decision not to rule out and Australia opting not to review, the pair began to build a partnership. useful in the second session. .

Root looked to have a good touch as he threaded a couple of superb shots through the decks, but just as England seemed to have gotten into a reasonable position, a mid-order collapse ensued.

It started with a close call to Root, a hit to the front pad by Starc and Australia called for a review, only to see the ball missing the stump.

The England captain survived, but brought with him a renewed sense of danger that was realized when Malan (25) watched a rare Cummins throw down the side of the leg and straight into Carey’s gloves after a 49-run stoppage.

Cummins struck again in his next over and this time it was Root’s ever-crucial scalp with a delivery that swung sharply back and pinned the righty up front.

Ben Stokes (4) followed from the last ball to the next, hitting a short wide Starc hard to the back end, only for Lyon to latch onto a fantastic hold heading to his left and with that 78-2 it had become 85. -5 in the space of 3.2 overs.

Ollie Pope, back on the sideline to replace the injured Jonny Bairstow, and newcomer Sam Billings each showed their skill with a flurry of well-timed shots at the fence.

However, a promising position came to a maddening end with Pope (14) trying to defend a ball comfortably off the stump of Boland (1-33) and slipping from behind.

It should have been two for two for Boland, as Woakes cut the next one straight to Warner on the first slip, only for the usually-so-reliable slider to chip away at the opportunity, with the Aussie closer left disappointed again on the last one before tea, another edge from Woakes and this time Khawaja dropped the catch on the third slip.

Having had that good fortune, Woakes continued to hit positively after the break, while Billings (29) was recovering nicely on his first test hit before connecting a short pass from Green (1-45) straight to Boland with the thin leg to finish. a 42-race seventh-wicket association.

Woakes had taken Green out for six earlier in the same over and maintained his positive approach, only to become the second England batsman to be choked on the side of the leg – the weakest edge shown on HotSpot when Australia reviewed, giving Starc his second wicket.

The left-arm fast bowler almost bowled Broad next and finally got his man on the last ball of the over, a dragon to drop England nine down, with Wood (16) castled by Cummins three balls later to close out the innings. . .

England made the ideal start when they went in search of much-needed wickets in the hour and 25 minutes they were allotted before the stumps as Warner bagged his second pair in the Ashes cricket as he pushed in a wide shot from Broad (1-9 ) and was well caught by Pope on the back point.