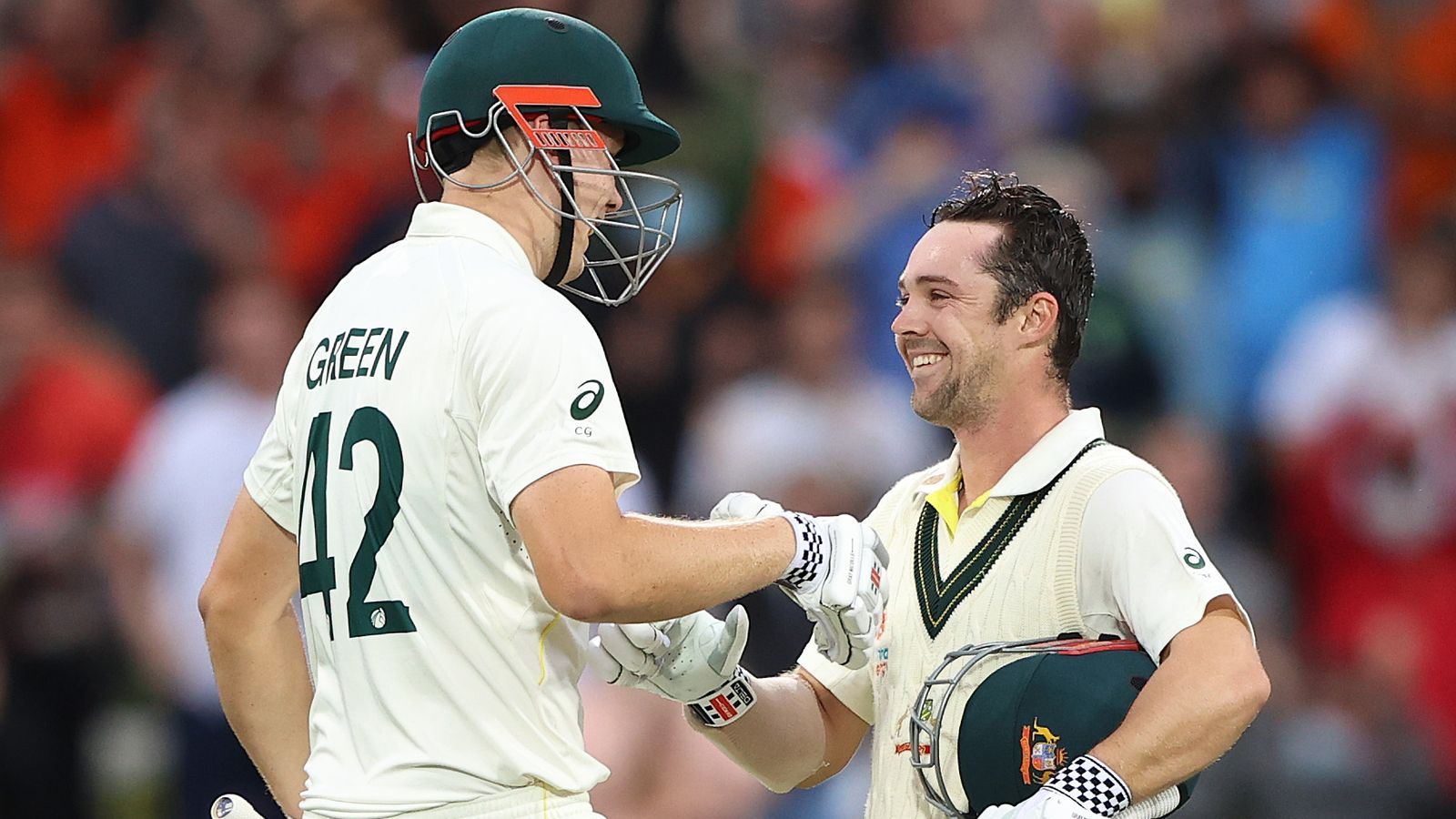 Australia went 241-6 in stumps on day one of the day-night ash test in Hobart; England had cut the home team to 12-3 before Travis Head led the comeback with his fourth Test century; Cameron Green reaches half a century while Stuart Broad and Ollie Robinson take two wickets each

Travis Head led the way with a magnificent counter attacking century as Australia recovered from a 12-3 deficit in a thrilling first day of the fifth Ashes Test in Hobart.

England had made an almost perfect start to the match after opting to bowl first with Ollie Robinson and Stuart Broad dismantling the hosts’ top order with the new pink ball as David Warner and Steve Smith went down scoreless.

However, the home side rallied impressively with Marnus Labuschagne (44) and Head (101) beginning the comeback before the dinner break and Cameron Green (74) later joining the latter to continue in charge at the halfway mark. the session.

Head was sacked after mentioning his fourth Test hundred and Green departed after tea with Australia having progressed to 241-6 when rain put an early end to an exciting day.

England confirmed five changes to their XI since the draw in Sydney shortly before the draw, which was delayed half an hour due to rain, with Sam Billings brought in to make his Test debut and Rory Burns, Ollie Pope, Chris Woakes and Robinson all returning

When the game began England couldn’t have asked for a better start as Broad and Robinson found prodigious seam movement with the new ball and had Australia reeling 12-3 in 10 overs.

The starters had struggled through the first few overs before Warner pushed Robinson forward and passed Zak Crawley on the second slip to depart for a 22-ball duck.

Robinson should have had Labuschagne in his next over, finding the lead again when the world No. 1 test batsman, looking to get off the mark, advanced, but this time Crawley reeled off the catch as he lunged in front of Joe Root, who would have had a legal catch.

That was soon forgotten, at least for a time, as Broad lured Usman Khawaja, rose to the top of the order after his two-ton SCG to accommodate Head, went ahead and located the edge with Root gobbling him up in the first slip. .

Five balls later, things got even better for the tourists when Robinson (2-24) faced Smith and the ball flew off the shoulder of the bat to Crawley, who made no mistake this time.

Labuschagne and Head battled to drinks and then came to life, a flurry of attacking punches with Mark Wood and Woakes unable to sustain the pressure applied by the opening duo as the lavish seam move dissipated.

With the disciplined line and the length of the first overs nowhere to be found, Labuschagne and Head cashed in and took just 7.1 overs to bring out their partnership of fifty with the Hobart countryside seemingly transformed from minefield to featherbed.

The second hour was dominated by the home team and memories of Crawley’s earlier fall suddenly to the forefront of England’s minds as Labuschagne walked up to Woakes, took the ball from just outside the stump and lobbed it over midwicket in a manner reminiscent of to the great Sir Viv Richards. .

All of which made the sacking of Australia’s No. 3 even more perplexing. Once again, he moved down the field and inched toward the offside, but this time Broad (2-48) shot the ball full and straight, Labuschagne losing his balance and ending up sprawled on the deck as the ball landed. crashed into the half stump.

It was a much-needed breakthrough for England before the dinner break, but any thought of a quick run through Australia midway through the session was dashed as Robinson struggled past second, at a very low pace, before exiting the country.

England later confirmed that the closer had back spasms and did not bowl again on the day, leaving the visitors with just three available closers on an increasingly flat surface and Root himself forced into action. , his off-count spin of 10 of a possible 59.3 overs on day one.

With England at a disadvantage, Australia did not relax on Head in a ruthless fashion, punishing bowlers whenever they erred on their line or length, while Green soon joined him, taking advantage of his height as he advanced to strike the ball. covers over and over again.

With tea approaching, Head passed into the 90 and, after getting away with a leading edge that went over Woakes but missed Robinson midway through, took out his second hundred of the series with a past gully guided by two.

However, he went to the next ball when he hit Woakes (1-50) meekly down the middle and this time the ball did go to hand, ending a 121-run standing. A relief for England at the end of a session in which they conceded 130 runs in a disheartening 28 overs.

The pain continued after tea with Green growing more confident, driving both brutally and elegantly through the sheets to pass in full view of a maiden Test hundred, prompting England to resort to the short ball ploy.

It’s a tactic England have tried at various points during the series with little success, but this time it worked. Wood (1-79) pestered him with a pair of bouncers before turning the wicket around, hitting another that Green beat straight past Crawley in the deep hook wicket.

Rain began to fall soon after and after initially trying to continue playing, the referees carried the players off the field and, although it was little more than a drizzle, it was enough to prevent them from playing any further.

England must now try to get over the potential loss of Robinson and hope Wood and Woakes prove less costly as they try to close out Australia’s innings on day two.