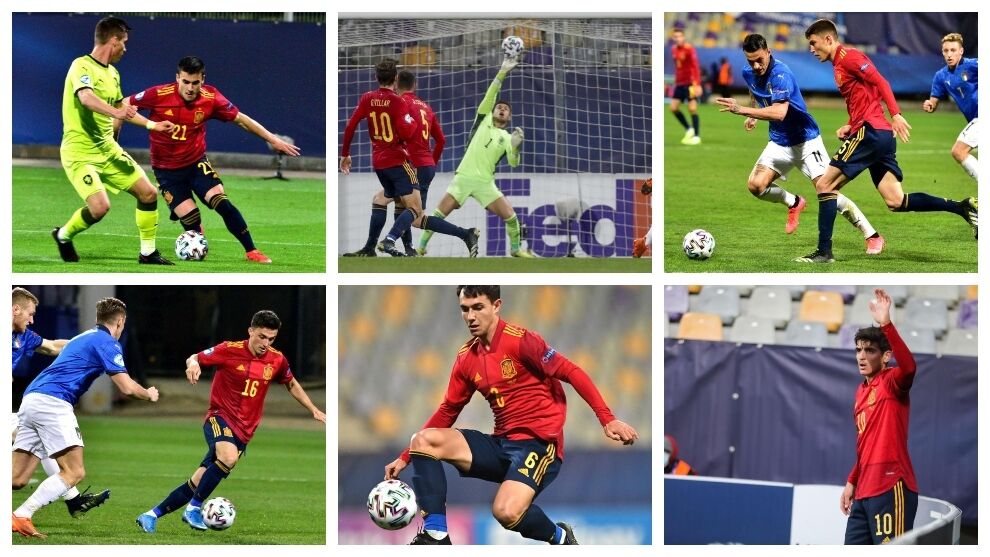 Players like Álvaro, Barrenetxea, Puado, Manu García or Villar have established themselves in the team

CWith the pass to the quarterfinals in the pocket, the Spanish under-21 team has left great sensations in the three games played in Slovenia. Although football perhaps went from more to less, the truth is that in the face of the final crosses it will not be easy for footballers who have not entered the list of Luis de la Fuente make yourself in hollow.

Obviously, with ten days of League ahead, there remains a world to demonstrate the potential of each one. In addition, the coaching staff of the U21 team expects to have one of the six internationals who are at the command of Luis Enrique and is old enough to dispute the European.

The appointment of Slovenia with some doubts, but the truth is that there are footballers who have taken a step forward to establish themselves in the team.

An example is Alvaro. The goalkeeper of the SD Huesca he won the title thanks to the games played with his club. In previous calls he had lost his position with Josep Martinez, but his great intervention before Italy and his success with his feet have earned him many points under the sticks.

In defense there were many doubts in various positions. The sides are still in a similar situation but the truth is that the center of the rear has increased the level. Although he had conceded just one goal in ten games, the centrals worried, but Cuenca and Guillamón they have grown with the passing of the parties.

The center of the field is Zubimendi Yes or yes. It was a shame not having him one hundred percent, but the realist is the engine of this team. Gonzalo villar has earned points in the absence of a Pedri that has not shone when it has been with the Sub 21 and Manu García He has increased his stripes on the team. He started out as a substitute and is now a basic pillar. They have no doubt in the selection that the Asturian is a player of First division.

Continuing in the core, one of those that has been reinforced is Moncayola. The Navarrese is one of the players with the best shot on the team and the fact that he plays inside his team gives him a versatility that they try to take advantage of in the national team.

Up front, the one who has advanced the most positions has been Barrenetxea. Without making noise but standing out in training, he won being a starter against Czech Republic and during the crash, it was key. Its overflow is something that is not enough in the Sub 21 and Luis de la Fuente he has him very much in mind to open the rival defenses.

Despite not having scored a goal, the work of Abel ruiz It is highly valued by the technicians of the national team. His game with his back to the rival goal and his ability to connect with his second-line teammates make him the team’s ninth starter despite having disappeared from the lists for much of the qualifying round.

In one of the players in whom he has the most hope Luis de la Fuente is Dani gomez. The Riojan insists a lot in each training with the attacker of the I raised. Try to be well on top of it aware that it can give great results as seen against the Czech Republic. The granota knew how to wait his moment and finished the tournament in a big way.

Handful is having a great season in Second, but in the European showed that he is ahead of colleagues who are in First. He started playing on the inside, but he likes it better when he opens the field and takes advantage of his speed on the outside. In a team where there is no excess goal, the parakeet is important against the rival goal.

Thus, with some players who are giving a high level every time they go out to compete and who cannot be asked much more considering that up to six are in Second division, it does not seem easy to enter. Footballers like Óscar Rodríguez or Aleñá, for example, they will have to significantly increase their performance to be in Maribor next May 31st.

The cap of Maxi Gómez