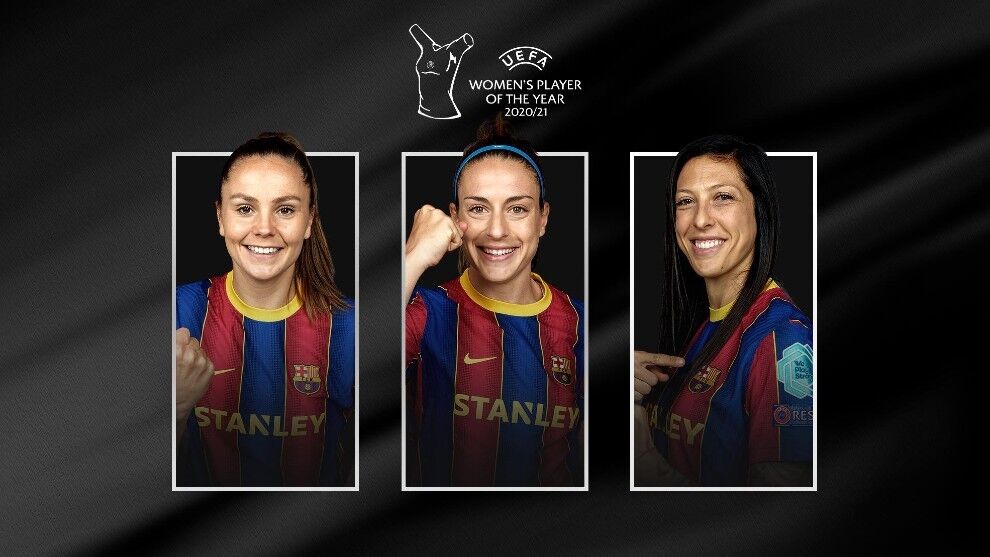 Barcelona win the list of candidates for the Best Player Award for UEFA, which will be resolved on August 26 in Istanbul. Alexia Putellas, Jenni Hermoso and Lieke Martens are competing for an award previously won by Nadine Angerer (2013), Nadine Kessler (2014), Celia Sasic (2015), Ada Hegerberg (2016), Lieke Martens (2017), Pernille Harder (2018), Lucy Bronze (2019) and Pernille Harder (2020). It is, therefore, the first time that a Spanish woman opts for this award (and that sneaks into the three finalists). What’s more, Lluís Cortés also opts for the Best Coach Award Women’s Soccer for UEFA.

The list of finalists was selected by a jury made up of the coaches of the teams that participated in the knockout stages of the Women’s Champions League 2020/21 and twenty journalists specialized in women’s football and selected by the ESM group (European Sports Media) in which MARCA is one of them.

Two Spanish women compete for the award for the first time

Alexia Putellas was one of the most unbalanced axes of Barcelona last year, leading a midfield that amazed the world together with Patri Guijarro and Aitana Bonmatí. The captain of the Barça team was one of those in charge of lifting the League, Cup and Champions League titles that Barcelona signed in an immaculate season in which, in addition, she signed 26 goals on her payroll.

Jenni Hermoso was the top scorer of the last edition of the Champions League with six targets and the top scorer of the Primera Iberdrola for the fifth time in his career with 31 goals in 26 games. In addition, it was the second top scorer in the qualifying round for Euro 2022 that Spain will play in England next summer with ten goals, only behind the 12 of the Belgian Tine De Caigny.

Two other Spanish women in the ‘top ten’

Lieke Martens, who already won the trophy in the 2016/17 season, scored 20 goals and 16 assists in his season with Barcelona, with which she went from less to more until she became one of the most outstanding players in the final stretch of the course. The Dutch, in addition, was also a participant in the Netherlands’ qualification for the Eurocup next summer and scored four goals at the Tokyo 2021 Olympic Games where her country reached the quarterfinals.

In addition to those mentioned, two other Spaniards and three Barcelona players appear in the top ten most voted footballers. Aitana Bonmatí he finished in fifth position with 29 points; Irene Paredes in tenth place with 11 points and Caroline Graham-Hansen in sixth position with 28 points. The list is completed by Vivianne Miedema fourth (32 points), Sam Kerr seventh (18 points), Fran Kirby eighth (18 points) and Pernille Harder ninth (17 points).

Cortés finalist and Vilda in the ‘top ten’

Lluís Cortes, who was Barcelona’s coach last season, is also up for the UEFA Women’s Football Coach Award together with Peter Gerhardsson (Sweden) and Emma Hayes (Chelsea). The Catalan coach, who was already third in the vote for this award in the 2019/20 season, directed Barcelona from historical triplet in a season in which he scored 208 goals in 47 games officers.

It was one of the finalists but in the top ten of the best coaches in women’s football also appears Jorge Vilda, national coach, who finished in tenth position with 3 points. He is accompanied on the list by Olivier Echouafni (PSG) with 24 points; Jens Scheuer (Bayern Münich) with 17 points; Rita Guarino (Juventus) with 10 points; Anna Signeul (Finland) with 10 points; Sarina Wiegman (Netherlands) with 7 points and Gareth Taylor (Manchester City) with 5 points.

Vicente: “We have received both goals too easily”