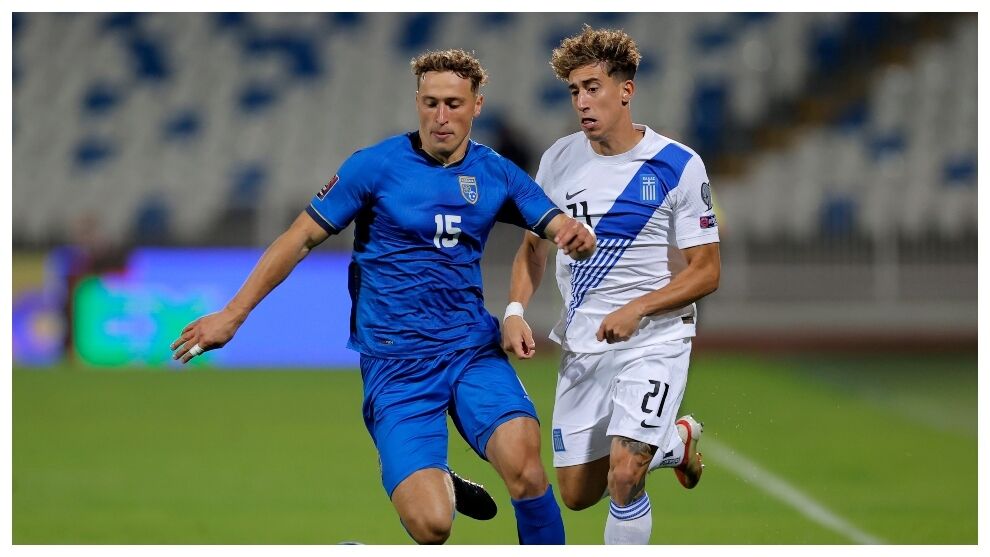 The costumes of the national team Kosovo It contains a series of tremendous stories, of terrifying experiences, of young people who today enjoy football and life, but whose existence was one step away from being swallowed up by the horrible war that caused thousands of deaths and displaced people. A drama that still embarrasses Europe two decades later. In March, Samir ujkani, Kosovar captain, told MARCA

as his father took them out of the country because a Serbian judge warned him that if he did not leave they would go after him. His relatives who decided to stay could not tell.
Vedat Muriqi
, Lazio striker, at the age of four knew the sound of a
kalashnikov
and the one with the rockets. And despair. He remembers running away from home, hiding in a tavern with more than 50 people, sleeping on boxes of bottles and with two liters of milk for everyone. In his soul he bears the tears of his mother and those of the other children locked there, when they asked for food. His diet, morning, noon, and night, was onions and bread. Serbian troops arrived at their home and gave them two hours to escape before wiping out the entire population.
“Allah protected us,” he recalls

Mergim vojvoda
(1-2-1995, Skenderaj) is another one that makes the hair stand on end. His parents were cornered and decided to escape to the north. The player today of
Torino
he had to leave his home and hide to escape the constant bombardment of the Serbian paramilitaries. He was just 3 years old when his land was filled with blood. His father, a military man, understood shortly after that if they did not flee, the worst awaited them in a place where death was rampant. With his wife and four children, he went north to the forest.
Mergim
He does not forget that: “We lived in the forest for months to escape the bombs, the devastated villages. We rode in tractors hidden under sacks of grain. We had to sleep in the open: tired, hungry, cold, thirsty …”. The family
Vojvoda
He succeeded and one day crossed the border of the
Czech Republic
. They left their land behind, then traversed by rivers of blood. But his odyssey was not over.

Mergim’s father, brother and one of his sisters were arrested for entering the country illegally. For weeks his family was broken. Together with his mother and two other brothers, he had to survive in tremendous conditions. Six months later they got together again and found a way to reach a country that became the refuge of thousands of Kosovars, including Mergim’s aunt:

Vojvoda
They found the peace they were looking for, but with the pain of knowing that many of the people they knew they would never see again. Football, which was another daily element in his family, served as an important vehicle for the integration of a boy who played right back. At the age of 16, in 2011, he entered the quarry of the
Liege Standard
. The door of professional football opened two later. He was loaned to a Second, the
St. Truiden
, with the promise that on his return he would be part of the first team. They lied to him. At the age of 20 he was sent to
Carl-Zeiss Jena
, a team from the former GDR that roamed the lost categories of German football. In a depressing hotel and earning 600 euros a month,
Mergim
He felt cornered again. So much so that he considered leaving football and looking for a job. But she decided she couldn’t give up. And he was right. The
Mouscron
he bet on him and took the step that catapulted him to be bought back by Standard de Liège (1.2 million euros). Today he is an important player so that the
Torino
last season saved his presence in Serie A. Vojvoda now has an elite footballer contract. But it does not forget where it comes from. “I earn money that I had never thought of, I have things that I could not imagine, but I do not forget where I come from. I know what it costs to earn money and I am proud of what I have been able to achieve,” he said in an interview with Le Soir . That past made him always look at
Kosovo
, long for his homeland. For this reason, when FIFA opened its hand, it did not hesitate. He accepted the change that allowed the Kosovars to change their national team. He is part of those who gave thanks to the sister
Albania
(He made it to the U21) and put on the Kosovo jersey. November 10, 2016 was a great day for him, the moment he received permission to play with
Kosovo.

Rrahmani
. On
Pristina
, Spain will have before it a player who faces each game with his country as a battle: “For me, playing with Kosovo is like being at war again. I become a soldier who defends his country, his home.” That’s him
Mergim
, which in Albanian means exile.

March 23, 1999 is a date that no one forgets in Skenderaj, the city where Mergim Vojovoda was born. 29 ethnic Albanian civilians were killed or disappeared without a trace; of 16 of them their fate remains unknown. Despite the evidence that those responsible belonged to the 125th Motorized Brigade of the

Pristina Corps of the Yugoslav Army
, no one has been convicted to this day.