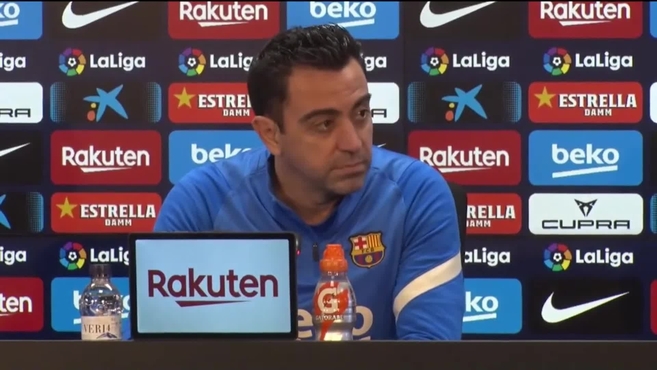 Lto injury of Ansu Fati It has been a very hard setback for him. Barcelona and, of course, for the player himself. Xavi Hernandez He has recognized that the footballer is emotionally very affected and that on Monday it will be decided if he has surgery.

What do you ask of midfielders under pressure?

“I ask them to seek superiority once the pivot is facing the game. That we arrive with many people in the area to look for the shot. At the start, we look for 8 against 6. We give solutions to the footballer and they must choose. The other day , for example, Ter Stegen was very good in exiting the ball”.

“In the first half it was difficult for us to progress. We have to try to play in the opposite field. In the second half we were better. Athletic had us pressing. Tomorrow will be a test to see if the team has improved”.

“There are people with discomfort and they are making an effort, like Jordi Alba. Also Frenkie. There is a team to manage, with extensions and others. We have to continue with the people available and with those who we believe can perform better. Frenkie must be important and it will be.

“We give the list tomorrow. It is not decided if he travels.”

“We have analyzed the game. I think they beat us because of intensity, because of courage. We talked about values ​​that should never be lacking and that day must be lacking. It was a game to match that intensity and we lacked it. Besides, we had talked about it. Tomorrow, in Vitoria, it will be practically the same”.

“If there is a coach who can do it, it is Mendilibar. He is a great coach, he has already shown it. He has always complicated things for us with him as coach”.

“We have to insist more on everything that we believe is the idea, the style, to compete better. It’s not giving us results. At Barça they have to grit their teeth and work harder”.

“We are frustrated and sad because we have tried to take care of him. We are having very important setbacks. It is very difficult. This setback makes me feel very bad. It is a shame, but we have to continue”.

“The meeting is on Monday. With the family, with Ansu, with the doctors. We are here to help them with whatever they need. Let’s see how confident they are with the club’s doctors, who are the best”.

Dembélé if he neither renews nor leaves

“There are still days left and he knows the situation. There is no other alternative”

It is not yet decided if Dembélé enters the list

“I still am. If not, I would go home. I think we are at the beginning of something important. You have to insist and persevere. It happened to me as a footballer. At first there was mistrust and it went ahead. I understand the criticism and I know where I am I know that there are no years of transition here. It is a very difficult moment. Right now you see the players, the coaches, the presidents, the fans…”

“Anything to recover him mentally. We need him. He is an impressive footballer, capable of making a difference. It affects us all, but he is the main affected because he cannot do what he likes. We have to try not to get injured anymore “.

“He’s training well. He knows his situation and it’s up to him.”

“The results. We may need more time than we thought. I am worried about the results. During the week you seem to work well, but then there are no results. We urgently need a positive result. We believe a lot in this model and this idea. Patience.”

“We are working on it. In several areas. We have talked a lot with the club. I have been very clear with them about what I think the team needs to reinforce. We are working to incorporate people. From what we want to what we can there is a little bit We are working. There is the salary limit, the chips… we’ll see.”

“He is very affected. It is a very difficult situation. Now we have had a meeting with the family. The extension has disrupted our plans for the time he had to play. We will try to make a very specific plan for him, so that he does not get injured again He has to make a very strong recovery.”

“They are quite similar in the system to that of Athletic Bilbao. We will find ourselves in a quite similar match. We will try to compete for the three points, which are vital to regain confidence. We urgently need victory”.