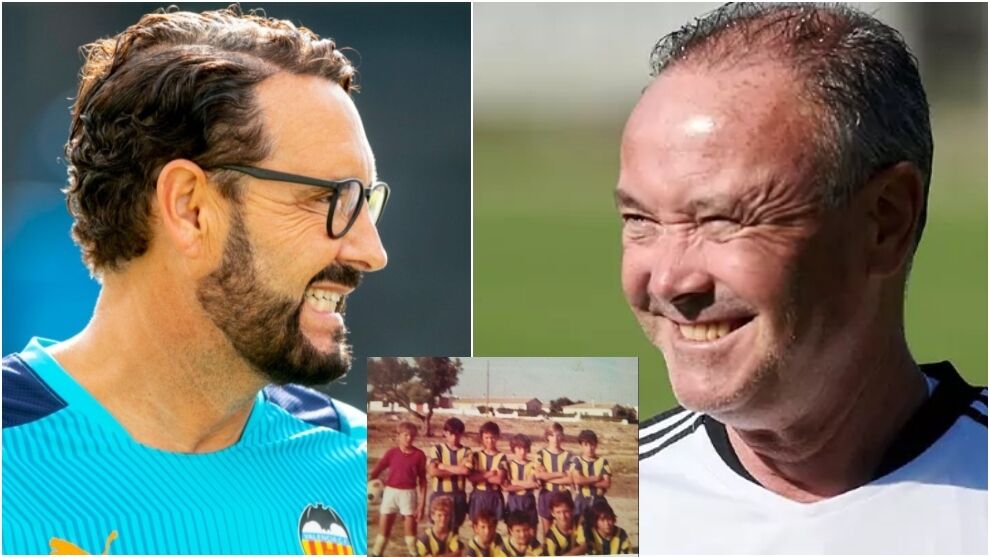 Jose Bordalás will face again Juan Ignacio Martínez (JIM) in the benches ten years later in the friendly between the Valencia and Zaragoza (Wednesday, July 28, 6:45 PM at Pinatar Arena). Beyond the family relationship, they are cousins, the two technicians they grew up together in Rabasa (Alicante) and they competed on the same children’s team. In the time when the children spent more time on the street that in their homes, José and Juan Ignacio they guided their companions in games with the fair rules to challenge the nearby neighborhoods.

It will be the fifth time they face each other as coaches Bordalás and JIM after having coincided in Second division between 2009 and 2011, with José in Elche and Juan Ignacio in Cartagena (2V 1E 1D for the current Valencia coach). In this case it will not only be a friendly meeting, but also a very family one. “He is like my brother, I love him very much, and we have an incredible relationship,” describes Bordalás. “We were partners first in our beginnings, very little ones, We face as small as footballers, in children and youth and then, as coaches, in Second “.

“Pepe [Bordalás] he was a great player “Juan Ignacio responds. “Forward, southpaw and a absolute team leaderI’m almost seeing him with the captain’s armband then. ” JIM’s parents had a bar in Rabasa, very close to barracks of the army: “Then there would be about 200 very humble houses, no more than five streets”, remembers JIM.

Bordalás was a great player, forward, left-handed and an absolute leader. I always remember him with the bracelet “

The very close relationship between Bale, José’s mother, and Maria, that of Juan Ignacio, made his children -10 the Bordalás, 5 the Martínez- spend a lot of time together and had almost more of a sibling relationship, that of cousins. More so the case of the two technicians who were born the same year. “Our mothers died, but our aunt Maria still lives and whenever work allows us we do our best to have lunch together in Alicante“says JIM.

The endless afternoons of street and ball football ended when Bordalás signed for Hercules and JIM for Elche, with about 13 or 14 years.

In their careers as technicians there’s also many connection points : “They told me there was going to be a call for the National trainer course (current level 3) in Murcia and we did it together in the 1994-95. This was very hard. There was a selective to which we presented a hundred and we spent only 30 “, remembers Juan Ignacio.

Juan Ignacio is like my brother, I love him very much, and we have an incredible relationship “

There are more aspects in common already during their careers. Juan Ignacio Martínez led Levante to the Europa League, after touching the Champions In the season 2010-11, the best historical classification of the club granota (6th). Bordalás did the same with Getafe on the 2018-19, when you classified it into fifth position and play the Europa League the following year. The two have been recognized by the National Coaches Committee with the Ramón Cobo Award (Juan Ignacio, in 2012, and Bordalás, in 2018) of high prestige among bench professionals.

Now, Bordalás and JIM face each other again, this time in a friendly, waiting for you one day they may coincide in First division. “It was about to be in the 2011-12 season when I was in Levante in First Division. That summer Elche [entrenado por Bordalás] played promotion promotion against him grenade, that it got controversy over a legal goal annulled to Pelegrín. That could have been the moment and I think it deserved it. Afterwards, he has done a great race in Getafe and I am convinced that will take Valencia where it deserves“, predicts JIM.

Juan Ignacio is a magnificent coach, I wish him the best. He already showed it last year at Zaragoza “

“You I wish the best because he is a magnificent coach He has shown it during the years he has been directing. Has made a great job in Zaragoza last year a critical situation of the team arrived and has been able to save the category with solvency and even to practice good football “, Bordalás concludes.