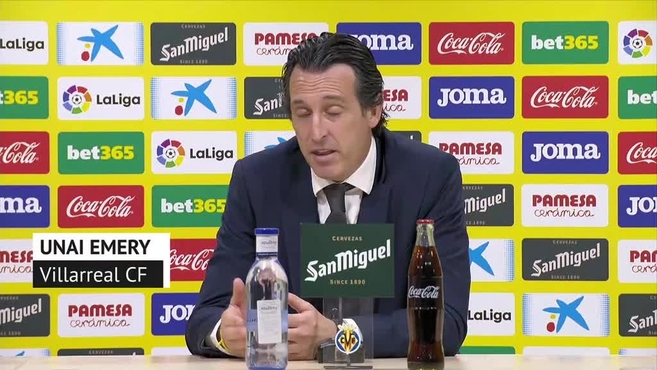 Unai emery regretted the Villarreal defeat against Barcelona although he valued the work done by his players during the match, especially as a result of staying with one less player for the expulsion of Manu Trigueros. The yellow technician considers too rigorous expulsion of his footballer and he doubts that “the other way around” would have been the same referee.

“The points are what marks the analysis, and we have lost an opportunity to continue in the Europa League positions. In the game, losing to Barcelona is normal if they are in control of the game and efficiency. We played a good game or in terms of not allowing much from the control. It is true that in the first half something else has come. We have tried to apply high pressure and we have found a response with our options and Samu’s goal. [Chukwueze]. But his response has been effective and quick. In the second half we have deactivated them and we have been closer to their goal, but the expulsion has conditioned us. Good feelings, but bad result. Anyway, the feelings have to give us confidence for what is coming in the league and in Europe. “

“We all know that Barcelona arrived at a great moment and the league was played. But we have tried to find answers and be able to compete with Barcelona. The mistake of the second goal and the expulsion have conditioned us not to have a greater capacity to respond. But the work has been good. In the second half we have equalized the balance with the ball, although it has meant a greater effort and a punishment. It could not be, but nothing can be said about the players. We must have a continuous line “

“Trigueros touches the ball but, due to inertia, slips and also touches the player. I only have the question of whether the reverse would have been an expulsion. If it had been a Madrid or Barcelona player if it had been red”

Get up for the home stretch

“Looking ahead, the team lacks a bit of the regularity that we have had at times this season. It is important that we strengthen ourselves and look only ahead. We face a beautiful, exciting and difficult tie, but that difficulty is the Challenge. In the Europa League we have maintained that consistency and credibility at a high level. Apart from there we want to respond in the League and seek fifth or sixth place.

“We tried to talk a lot with the doctor, to know the responses of the players at the level of fatigue and muscle fatigue. Today we made the decision that Pedraza should not be there because he had told us that he came with muscle fatigue. The rest were to play. It would have been different if we had defended down and with the need to do many runs of many meters. But we have had the ball in a high percentage and we have regulated efforts without the ball. There are four days until Thursday and we are prepared to endure mentally and physical, but we will have to make the right decisions. Tomorrow we will rest and from Tuesday we will prepare the game against Arsenal “

“The team is understanding what two competitions are and what each one requires at the time. We will continue in that line. We must contextualize the illusion in two very beautiful games where we will try to give our best version against a great rival. Once having forgotten Barcelona, ​​we focused on Thursday’s match and it is a very nice moment to enjoy it. “

Lopetegui will repeat the stand in a big game