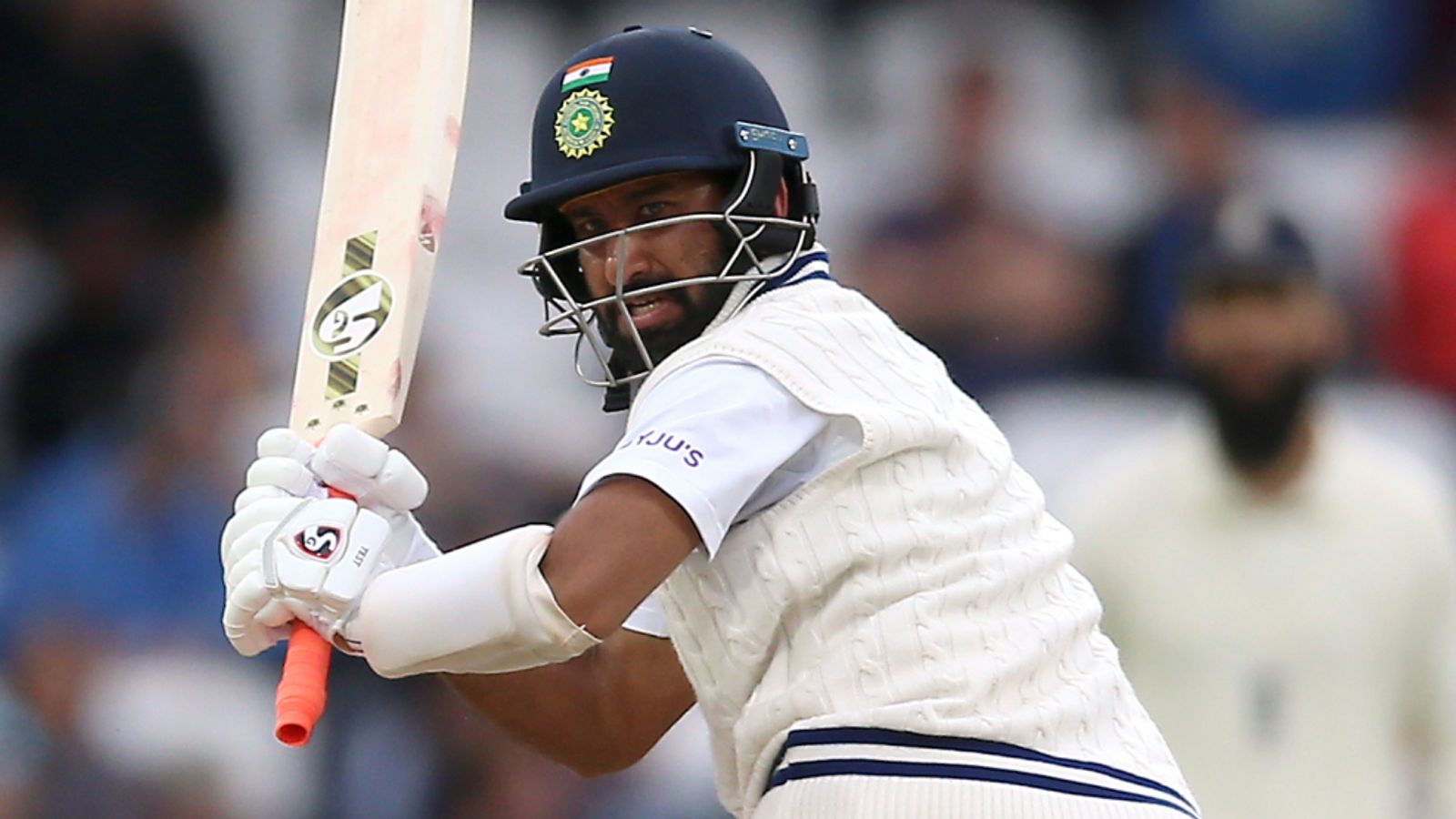 India closed 215-2, losing 139, after half a century from Cheteshwar Pujara (91st) and Rohit Sharma (59) who frustrated England on the third day of the third test; Watch the fourth day from 10.15 am, Saturday on Sky Sports Cricket

Cheteshwar Pujara scored an undefeated 91 when India thwarted England on the third day of Test 3 at Emerald Headingley.

Having battled for runs in the series, Pujara stood his ground when his team needed him most and led India to 215-2 on the stumps, putting up 82 with Rohit Sharma (59) for the second wicket and then adding an unbroken 99. with Virat Kohli (45th).

It leaves the tourists needing another 139 to get England back to hitting and Joe Root’s team remains a firm favorite after establishing a 354-run lead in the first inning, but India’s hitters made sure they will have to fight. until the very end to secure a leveling victory for the series.

While Pujara will be aiming to complete his century, England will look to the second new ball to kick off their winning drive as they seek early terrain on day four.

England still had hopes of increasing their lead in the first inning at the start of the day, but India needed just 3.2 overs to take the two remaining wickets with Craig Overton (32) and Ollie Robinson (0) fired by Mohammed Shami and Jasprit Bumrah. , respectively, as the hosts’ first excavation ended in 432.

India’s starters pulled out knowing that filling the crease, at least initially, was just as important as scoring runs and with coal skies above that wouldn’t be an easy task.

So it turned out with Robinson and James Anderson finding a wide swing with the new ball but, although they went over the edge several times, they couldn’t find it, a pattern that continued for much of the day.

KL Rahul (8) needed a review to overturn an lbw decision after Robinson gave lbw to a pincer, ball tracking showed he would have missed the leg stump from a mustache but could not see the end of the session.

Overton (1-35) finally found the lead with the last ball before lunch and Jonny Bairstow held onto a surprising one-handed catch as he headed to his left on the second slip.

It was a good boost for the home team before the break, but they were unable to take advantage of it in the afternoon session as Rohit and Pujara battled for another trial period in the first hour before profiting when England’s bowlers were They frayed in the hour before tea.

Rohit needed some luck at 39 after Robinson hit him on the front pad when the referee rejected England’s lbw appeal and Joe Root deemed it a fraction of a second too late to try to call for a review.

If it had been a little quicker, the decision would have been reversed and Rohit would have left his way. Instead, he stayed and reached his fourteenth fifty-of-126-ball test before tea.

The opener’s luck with DRS balanced in the second over of the afternoon session. This time, the referee replied in the affirmative when Robinson (1-40) and England released a shout for lbw, a decision that stood in the review courtesy of the ball-tracking prediction that the ball would not have severed the stump of the leg but would have grazed it. that.

It was enough and brought Kohli into the middle to join Pujara’s unusually free. India’s No. 3 entered the innings with his spot on the wing being questioned and he responded comfortably with his most determined hit of the series.

His half century sprang from 91 balls and included nine limits, showing good intent against some tired England bowling and defending hard when necessary.

Meanwhile, Kohli also grew more like his old self as the day progressed, driving well through the decks and not getting carried away by the deliveries on a fourth or fifth line of stumps that have troubled him thus far in the series. .

The seasoned couple from India had brought out their 50s partnership when darkness descended, and England was forced to bowling from both ends.

It almost worked for the home team though, as Root threw a beautiful off-break that carried Kohli forward and swung sharply to hit the inside edge, only to go slightly over the bail.

That was the only real scare for India before the players left after 80 overs of innings with England wanting to carry their closers back to the bowl with the second new ball, but the umpires deemed it too dark for them to do so. did.

Watch the fourth day of the third test between England and India from 10.15am, Saturday at Sky Sports Cricket and Main Event.