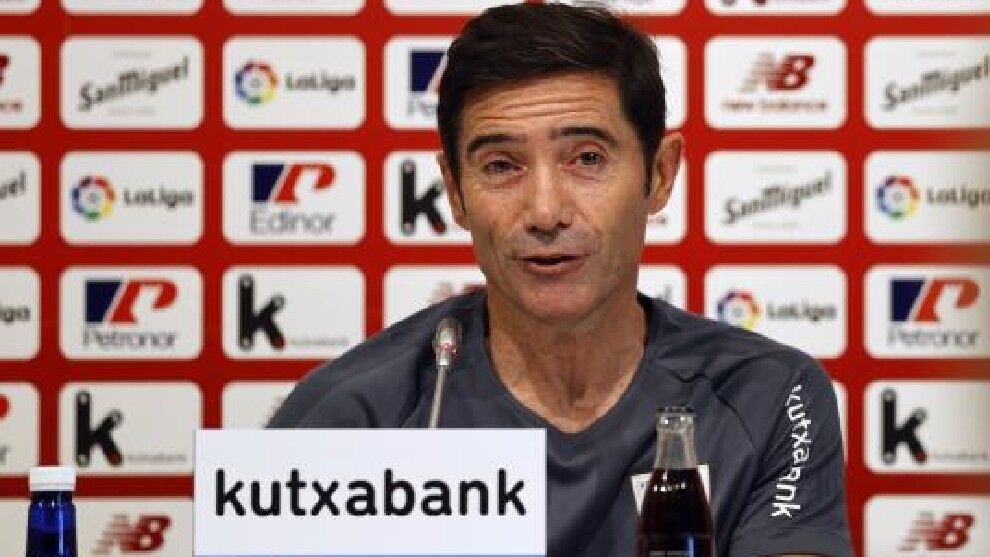 ANDl Athletic once again welcomes its people to face a Barcelona without Leo Messi. An absence that marks the game and that for Marcelino “lessens offensive arguments“of the Catalans. The Asturian has wanted to make it clear that the assessments must be made after several days and has spoken about the situation of LaLiga after the departure of the Argentine star. In addition, he explained that he does not believe that Iñaki Williams will become a scorer and that the pressure on him is excessive, as well as “not logical”.

“The departure of Messi always has to influence because he is a player who, at the same time, we have suffered and enjoyed. It is a pleasure to see him play on the pitch. What happens is that Barça is so great that when that decision was made it is because he believes that the club is above any footballer and that it has solutions to continue with the history of titles that that club has. Before they depended on Messi in the offensive section in a very important way and now they have divided that importance among all the attack members. It is obvious that they can be less definitive and precise, but also with a lot of quality and footballers that we have to prevent from participating because they are decisive “

His absence from the game

“I would lie to you if I told you that I prefer to have him in front of him. It is undoubted. We are talking about the best player in the world. In all the teams in which I have faced him always turned out to be decisive. Not having it I don’t know whether to qualify it as a relief, but there is no doubt that Barça’s offensive arguments diminish. Another is that they have different shades so as not to miss him “

The state of the injured

“We are going to see how De Marcos arrives, because we are quite conditioned on the wings. Petxarroman, Yeray and Capa are short. In central we have the squares covered, but laterals we will wait until the last moment “

“It is the most difficult thing in football. What a large part of the teams lack is precision and good decisions in end zones, and more when you play against a retired team with many footballers within the area. That implies that the precision must be higher and it is more difficult. We had many arrivals, but we did not have that precision when we had situations, not many, numerically advantageous. You do not have completion, because you do not have a goal. We are not a very lavish team either. The numbers indicate this. We are insisting on arriving fast and with many people and those premises are being fulfilled. We will see if we are able to be more and more precise and, therefore, have more chances, which will almost certainly result in more goals “

The return of the public

“The tactic is not out of the question, but there is no doubt that it is a new and desired stimulus. With those 10,500 spectators we will try to enjoy and vibrate with your support to be strong and achieve good results in San Mamés. For the coach it will be an unforgettable moment. Another will be when you see the field full. Now I hope I can enjoy it, hopefully it will arrive as soon as possible because I think it is a very important sum for this team “

LaLiga against other leagues

“I do not know if it lagged behind, but I think we are distancing ourselves from the Premier. At a global level we are a competitive league, perhaps more for equality. We do not have two clear references at the media level as there were with Messi and Cristiano. We know that Spanish clubs are in financial trouble due to the pandemic And that has led to resorting to a fund for a certain lie … sorry, measure, reaching a conclusion that gives more possibilities to those clubs. Before it could be more striking to the outside, I don’t know if more or less competitive. Other leagues are approaching us “

On whether to win at Barça would relaunch the project

“No. I don’t think so because in recent seasons Athletic has been able to win Atlético, Barça and Real Madrid. Then we lack continuity. Teams are built over time and good results usually come through good arguments. It is measured by the sum of several games and when at least a quarter of the competition passes we will see the evolution of the team. Not for losing a game are you a bad team or going to play the Champions League to win at Barça. We have to be sensible because that leads you to see the weaknesses and the strengths of the team ”

“We believe in an idea that suits Athletic well. We have worked with an idea and a style and we will stay with it. We can give it variants that the game itself implies, We will not play the same against Barça as against Elche in certain details, but the base will remain. The players are comfortable with it and it makes us a competitive team. It is clear that we are a team that is difficult to beat. As for the long term, we try to look at the short term because it is what can lead us to have a long-term idea “

“I do not believe that Williams explodes as a scorer. I am calm because I do not expect him to score 20 goals. We cannot ask certain players for something that you are born with. You have the goal, you are born with it and certain qualities. Williams has other important ones and will score his 6, 10 or 12 goals. In some he can get to 15. From the inside we are trying to help him in everything. From the outside, all the obstacles in the world are being placed on it. We are Athletic, we have a philosophy of which we are all proud and that implies a series of conditions. I think we are not hitting shots in the foot if we put excessive pressure on our players which is not logical. The goal is normally bought and that costs 60,70,80 or more million euros. We cannot, neither by philosophy nor by economic possibilities. What do we do? I defend my players to the death. “

On whether he can learn the goal

“I met Aduriz when he was 20 years old and he was a nine. At Bilbao Athletic he scored goals and was a terrific striker. Then he earned it hard. I think he always scored a goal, but with experience he learned to position himself better, to have a break , improve your auction … it is difficult to find young scorers. All those who are born with a goal improve with their experience and depending on the team they are in, although the one who has a goal always scores them. Williams can improve his finisher side. In addition, we work to make it so. Then there is a mental component that is working with that obligation and obsessing when you don’t score. Experience helps you improve it and we are in this process “

What Koeman was missing … Pedri and Alba injured!

Lopetegui and the five finals: “The predominant word is illusion”