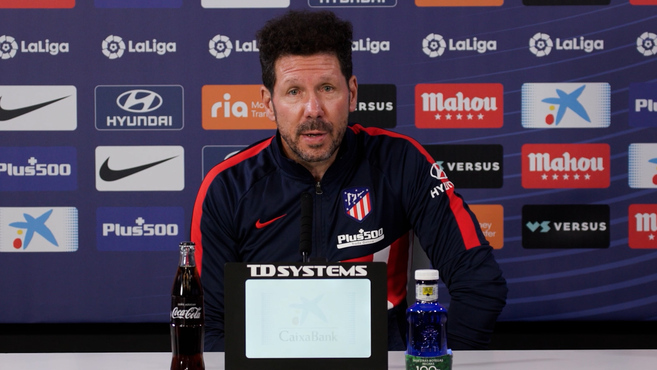 Diego Pablo Simeone attended the media to analyze the rojiblanca news in the pre-match tomorrow (21 hours) in San Mamés in front of the Athletic from Marcelino.

How the team has changed since the last visit to San Mamés: “Since the quarantine the team grew very good. From the understandings to what was moved to the field. This season we have been working very well throughout the year and tomorrow we will face a very competitive team as it has always been that we have faced. . “

Favorite to the title ?: “I am part of the four who are fighting. It would be unfair not to say us so I can not say anything”

Three away games in a row: “We go game by game, now we are dealing with the Bilbao game. Playing the game to hurt them and we focus on that game.”

Joao Félix, Suárez and Lemar: “They are going to train with the team now. We will see how they are today and as we see in training, tomorrow throughout the day we will decide how to play.”

Changes compared to the last games ?: “I have a clear idea of ​​how to face the game. I just need to put the names for tomorrow when I talk with the boys to see who is going to start.”

I gave it: “He is growing. He has known how to wait to return to the team. We need all the players for this end of the season. Renan responded very well to what was asked of him in these two games.”

What prioritizes for a recently injured to play, his hierarchy or the level of the substitute: “Seeking to win the game. Eleven that start and five that will be able to refresh the team. Based on that, we decide the quality of minutes that each player plays.”

Laporte: “Here I am freaking out all day; I enjoy myself like a child”

Celta is still pending the departure of Okay