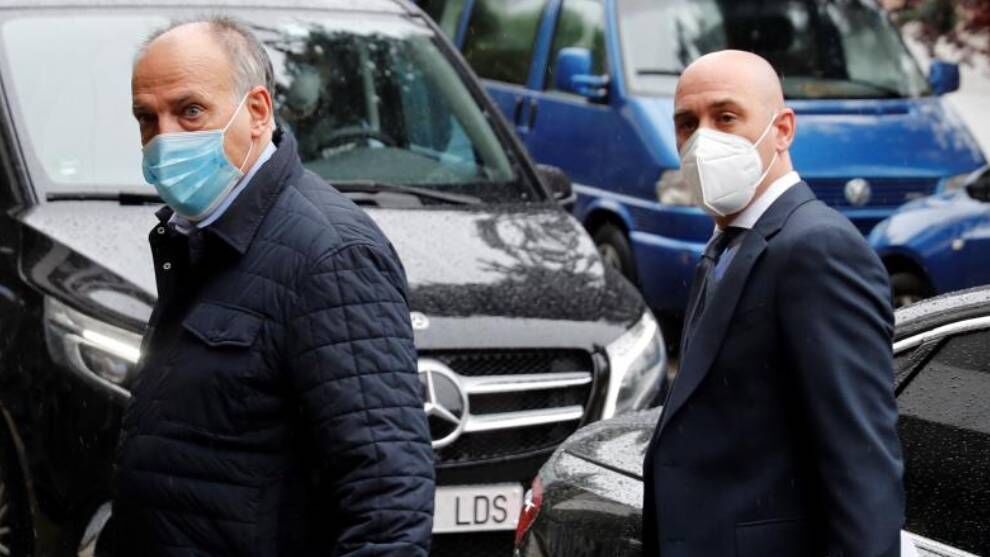 ORAnother statement, now from the RFEF in response to the LaLiga statement in which the employers responded to a first statement from the RFEF on the postponement of two matches for the next day by CSD, Sevilla-Barcelona and Villarreal-Alavés . In this writing, the Federation dedicates harsh words to Javier Tebas and accuses him of “a haughty, arrogant attitude and a total lack of education towards sports institutions”, as well as of using “low-income terminology”

During these years, the Royal Spanish Football Federation has maintained a defensive position against the continuous attacks of the LNFP and especially its President. His haughty, arrogant and totally uneducated attitude towards sports institutions (RFEF, TAS, FIFA, UEFA, Club Presidents, etc.) always pretending to have the last word on any subject and using terminology that is more typical of underworld than of Sports institutions have made this RFEF say ENOUGH to this way of acting. We are not going to lose our model of calm responses and without attacks on anyone and even less with slum terminology such as the one used by the President of the LNFP, but we are not going to be silent and we understand that we must not allow their charlatanism to end up being the truth of the facts when they are precisely one lie after another that has undoubtedly confused the CSD in a decisive and deliberate way, creating a precedent with extremely serious consequences.

1) “The CSD is competent for the adoption of the precautionary measure and the resolution is adjusted to the law, counting on jurisprudence that supports it.”

The CSD is not competent to modify the decision to suspend or not suspend a football match. It has never been and has always denied its competence. We have submitted to the CSD a brief of allegations where it is accredited that the same CSD has denied this possibility on innumerable occasions and has also been endorsed by the jurisprudence. Not some, ALL. The CSD is not the head of the competition and deciding on the suspension of the matches is something unheard of and a huge mistake, precisely for this reason the CSD had always denied until today its competence to resolve these issues. The LNFP has not been able to provide a single prior resolution of the CSD or a single sentence that, speaking of these specific issues, proves it right. On the other hand, the RFEF has provided the CSD with innumerable resolutions and sentences that support its position, such as the fact that a match has never been suspended because African players have been called up to play the Africa Cup. The CSD is going against its own actions. This has generated an earthquake in the national and international sports arena with legal significance that could even reach the criminal arena.

2) “It was LaLiga, as the organizer of the competition, who requested the postponement of the two matches as soon as the TAS had announced the denial of the precautionary suspension of FIFA Circular No. 1766, which was later seconded by the clubs that face each other. . “

The LNFP does not have standing to request the precautionary measure. This argument is so elementary that it makes us blush to have to deny it, therefore, the RFEF is right when we imagine that the CSD will have taken into account the request of the clubs, which are the only ones entitled to request a postponement. This is another demonstration that the LNFP constantly seeks to replace the autonomy of the clubs and take over the functions of the Federation. This is not a franchise model, Spanish sports federation law is based on the European associative model.

3) “The basis for the precautionary measure is twofold: a) The competition calendar was approved by Resolution of the CSD of June 27, 2021, respecting the international commitments in force at that time, which have been modified unexpectedly (and, for LaLiga, not in accordance with the law), affecting this and the integrity of the competition. Therefore, the decision adopted by FIFA in its circular has affected the organization of the competition, as it was originally designed. b) There is no harm some for the RFEF, given that the rescheduling of matches can be carried out on dates that do not coincide with matches of the non-professional competitions that it organizes. “The RFEF has no problem in which the professional competition coexists in time with non-professional competitions as it happens every day. The LNFP once again lies to the CSD by saying that FIFA allows the rescheduling of matches outside of the day. This is totally false and we are convinced that FIFA has never said what the LNFP says about the postponement of matches and matchdays.

FIFA and / or UEFA would only propose a postponement under two premises: 1-Compliance with the rules of the national federation. 2-Equitable treatment for all teams in the same competition. Never with a different treatment between one and the other. Furthermore, the federal regulations that the CSD does not comply with in its resolution has been approved by the CSD itself, which would constitute an arbitrary, unfair and contrary to law decision.

4) “The position of the RFEF is also surprising, when barely a year ago it opposed playing games with a break of less than 3 days in the return to competition after the break due to COVID. Now they want to make players play with even less 48h compared to the previous match and after a transoceanic flight and 3 matches played in less than 10 days, even arriving at the destination on the same day of the match. Which clearly affects the health of the players. It seems that in this case the RFEF does not care about the health of the players. “

The RFEF continues to maintain its criteria of rest, what the regulation says is that the absence of an athlete for being with his team does not allow the postponement of a match (article 239 of the Regulation approved by the CSD). Therefore, introducing this element is to want to confuse public opinion because it is a constant throughout the world that when a player is called up to play matches with his national team, he can miss matches with his club. In fact, the LNFP itself does so with the second division and without seeming to be contrary to the rules. This argument is reinforced by the Spanish sports law that requires the transfer of players to the national teams.

5) The LaLiga SmartBank calendar was unanimously approved by all Clubs, at the Second Division Board. With the prior knowledge and consent of these clubs, this calendar has been in the making for several seasons without stopping the competition in international periods. Neither of the second division calendar for this season. The clubs have known this circumstance for many seasons and design their squads accordingly, without affecting the integrity of the competition. It is so clear what the LNFP itself recognizes that we once again remember that Second Division clubs are also treated as second for everything else. The LNFP’s treatment of its own second division clubs is utterly disparaging.

6) “LaLiga is not aware that there has been any action by UEFA and FIFA in support of the RFEF and against the CSD. Furthermore, in the procedure before the CAS, FIFA has told CAS today that the The possibility of the postponement finally taking place, given the existence of a recourse to the CSD, justified not adopting any precautionary measure against Circular No. 1766. “

The LNFP always tries to sow doubts and generate a sense of lack of credibility in all those decisions that are not favorable to its thesis, it would be enough to read what the president of the LNFP said about the TAS members who did not agree with him. The LNFP is not aware that UEFA and FIFA support the RFEF for an obvious reason, which is that the LNFP does not represent either UEFA or FIFA in Spain, but the institution that has these functions attributed is the RFEF. This total support from both institutions has been manifested this afternoon and is documented. Enough of this improper style of an institution that must respect the other agents of the world of football. Finally, to say that there is no precedent for such a case in the whole world and this only happens in Spain because of the way the LNFP acts.

Hugo Mallo: “It is not reaching us to win”

Marcelino: “It will be complicated as it is the first time I return to Mestalla”