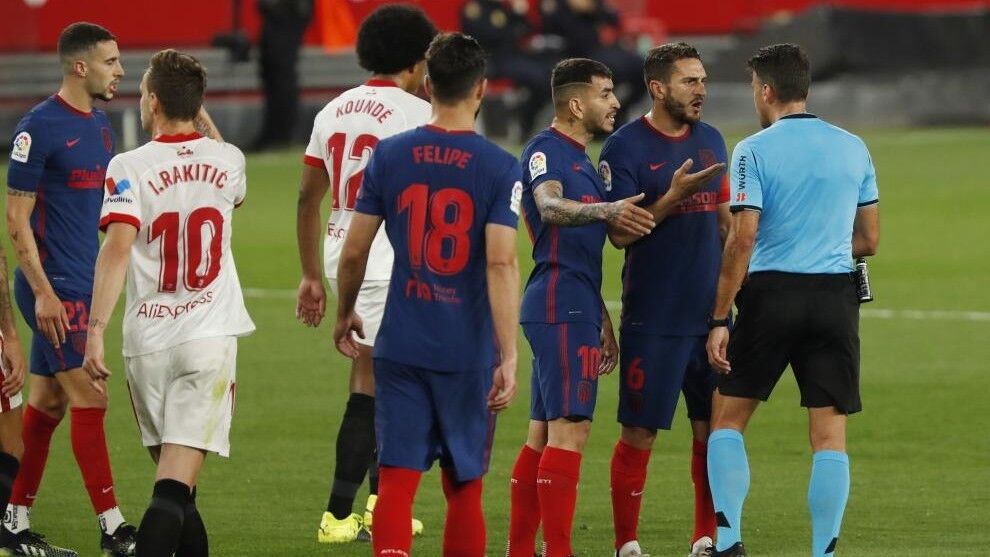 They are considered injured against Sevilla as has happened on other occasions with the same referee. They do not understand that he did not see the hand in the play of the first goal, nor the yellow ones to Suárez and Llorente.

“To achieve success you always have to fight against everything and AGAINST EVERYONE,” said Luis Suárez a few hours after Atlético fell in Seville after a bad first part and, above all, after several decisions that, they understand in the entity, clearly harmed them. The Uruguayan himself was one of those harmed in an action in which he saw the fifth yellow card… that will make him miss the vital duel against Betis.

They also complain in the Metropolitano about the action that ended in the warning from Marcos Llorente, who will also miss the Villamarín duel as Kondogbia. The cards are one of the bases of the malaise, but it is even more so the fact that the play of both Acuña, the only one in the game, started with una hand that must have seen a Gil Manzano who considered the goal valid.

Be that as it may the discomfort with the referee comes from afar. In fact, this same season he refereed them in Cádiz whistling a Koke penalty that had to be corrected by the VAR. Since that meeting, the rojiblancos understand, arbitration decisions have been happening that are costing Simeone’s points. The cards, in that sense, occupy a prominent place in Atlético’s complaints. The captain himself said “it’s time to fight against everything”, in clear allusion to the referee’s refereeing.

Gil Manzano’s detrimental arbitrations, according to Atlético, come from afar. They remember that expulsion of Gabi in a Cup tie against Barça in 2015. Then, on 14 he was sent off for, according to his later words, telling Gil Manzano “penalty and expulsion at halftime. A decision that conditioned a tie that ended on the Barça side.

More recent is the expulsion of Diego Costa against Barça himself at the Camp Nou. Atlético still had options to fight that League, 18-19, but Lagarto’s was expelled in the first half hour after protesting a decision (it cost him eight games of sanction after the drafting of the minutes) by a referee who has returned to be singled out for their decisions.

Pablo Hernández, star signing of Castellón for the First RFEF